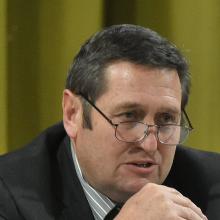 Gerard Collings.
A flood of community board nominations shows the Dunedin City Council should keep its hands off the make-up of the boards, two longstanding members say.

The comments followed an influx of last-minute nominations last Friday which meant every community board in the city would be contested for the first time in years.

Waikouaiti Coast Community Board chairman Gerard Collings and Otago Peninsula Community Board chairwoman Christine Garey, who are both standing down after October's election, said the nominations sent a message after last year's representation review threatened to get rid of one board and reduce members per board from six to five.

In April, the Local Government Commission rejected those suggested changes, which were earlier supported by the council.

Mr Collings said the number of nominations sent a ''clear message'' to the council that community members valued their boards.

''In my view council should reflect on that and see whether there is a space for community boards a little bit wider afield than they currently are,'' he said.

With the Local Government Commission agreeing to get rid of ward councillors, community boards would play an even more important role after the election.

He was happy with the contribution he had made while a member of the board.

''After 15 years, it's probably time for a fresh face and it's also time that I probably committed a little bit more time to my family.''

Ms Garey said the flood of nominations was ''very significant'' as the representation review panel had made it clear ''it isn't good enough'' for board members to stand unopposed.

This had prompted boards to search out potential candidates for the upcoming election.

After nine years on the board, she felt she had achieved what she set out to do.

Among her highlights was advocating for the shared pathway along the peninsula.

She was leaving the board in ''good heart'' and hoped to transfer some of the skills she had learnt as a community board member to the council, which she was standing for.