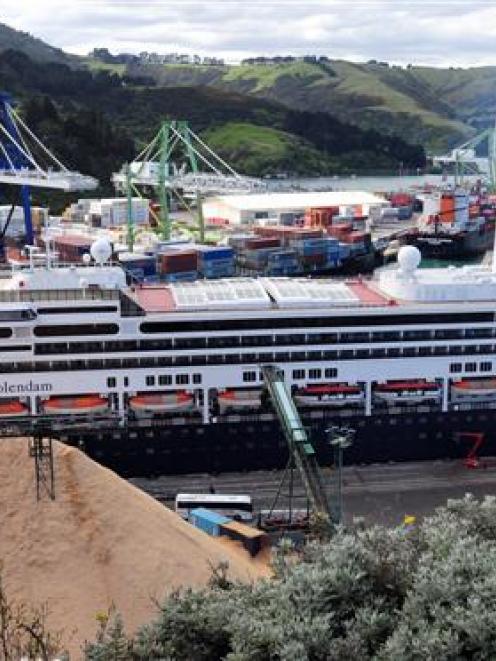 But Dunedin's medical officer of health, Dr Marion Poore, said because of the "very robust" processes the ship put in place to deal with the outbreak, she had no concerns passengers posed any risk to the city.

Dr Poore said she heard from the ship's agents when it arrived in Dunedin yesterday morning that 60 of the 2000 people on board had fallen ill with vomiting and diarrhoea in the past week from what was suspected to be a norovirus.

The number had increased from 10 people who were reported ill when the the health problems were first reported to the Tauranga medical officers of health last Sunday while the liner was in the Port of Tauranga.

Public health officers in ports along the way had followed the ship's progress as it journeyed south to Dunedin, Dr Poore said.

Because it was such a widespread illness, it was difficult to know where it was picked up from, but she was happy with the processes the ship had put in place to deal with the outbreak. That went a long way towards protecting people in the communities the ship visited, she said.

Many extra precautions had been taken on board: self-service was stopped, passengers were asked to wear gloves while handling items in shops, crew did not shake hands with passengers, newspapers and magazines had been removed, the library was shut and hand sanitising stations had been set up all over the ship.

A female passenger from Dunedin, who did not want to be named, said the illness was "not really" impacting on passengers who were not sick.

No-one in her group of 38 had caught the bug and none, including several elderly group members, was concerned about getting sick.

Staff were probably more affected by the illness through the extra work they had to do, and she understood extra crew had been brought on board to help out.

Frequent cruiser Jim Kravit, of Florida, said passengers had received no precautionary advice about leaving the ship, only that if they had symptoms they were asked to stay in their cabins for at least 48 hours.

He and his wife had taken many cruises and noticed that incidences of norovirus were becoming more common in the past few years, he said.

Tourism operators in Dunedin said they took extra precautions yesterday with hand sanitising and cleaning during and after passengers from the trip were visiting attractions, while restaurant operators in the Octagon said they were not aware there was illness aboard Volendam.

A Cruise New Zealand representative said gastroenteritis or norovirus outbreaks aboard cruise ships were not uncommon and "one or two" were reported each year.

Volendam was the second cruise ship to visit New Zealand this cruise season.