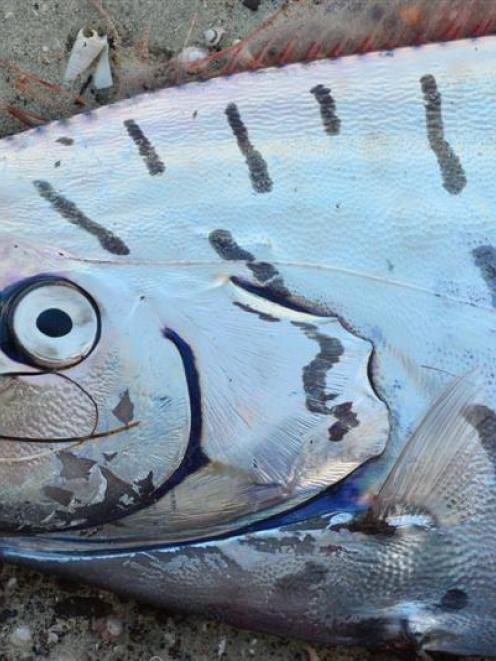 Doc service manager David Agnew said the oarfish, which was found on Thursday, had vanished by Friday afternoon.

The tide could have washed the fish away but there was a possibility somebody took the fish, Mr Agnew said.

''I'm surprised it washed away so quickly.''

Mr Agnew estimated the fish weighed more than 50kg and would have been difficult to carry.

There had been no reports of vehicle tracks to the salt marsh where the fish was found.

The fish was not protected by the Wildlife Act and could be legally taken but he discouraged anyone from eating it, as the cause of its death was unknown, he said.

Mr Agnew said Doc ended its association with the oarfish on Thursday after contacting the Otago Museum and Marine Studies Centre about it.

University of Otago NZ Marine Studies Centre manager Tessa Mills said she believed the foul-tasting oarfish was more likely to have been washed out to sea, than taken to eat.

''From what I heard, the fish wouldn't have been good to eat - it would have been quite gelatinous.''

In an ideal world, the fish would have been collected for a public dissection but it was not a simple process, she said.

''Ngai Tahu have to be involved for certain species - it's always difficult on how to get hold of the specimen. You can't just drop tools and go and collect it.''

To collect a fish, a favourable tide was needed, and resources had to be available, including vehicles, staff and suitable storage.

An oarfish was difficult to store because it was not suitable for freezing and defrosting, Ms Mills said.

The museum was not equipped to collect such a large fish and preserving a 3m-long fish in alcohol was a ''dangerous and expensive'' exercise.

The oarfish's reproductive organs had been collected but the sex of the fish had not been determined, Ms Burns said.

Ms Burns said she forgot to take the fish's skull, as a small piece of bone behind its eye would have revealed its age.

The muscle tissue samples taken had been ''pickled'' in alcohol and its DNA would be available to genetics researchers.

The museum also had a liver sample and searched the fish's gut for foreign bodies, she said.

''It looked OK. It had a big feed of krill before it died,'' Ms Burns said.