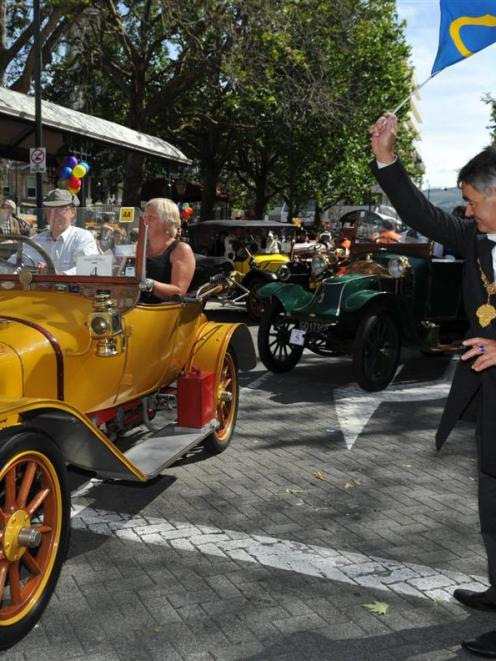 Dunedin Mayor Dave Cull waves off Chris and Pam Read in a 1914 Delage in the Octagon on Saturday. Photo by Gregor Richardson.
It was a vintage performance by some glamorous old-timers.

Brass gleamed and engines coughed at the start of the annual Dunedin to Brighton Rally, held by the Otago Branch of the Vintage Car Club on Saturday.

The 63 veteran cars and seven motorcycles were waved off in the Octagon carriageway by Dunedin Mayor Dave Cull, with a rolling commentary from broadcaster Dougal Stevenson.

Several entries struggled to start and loud cheers rang out from the crowd when they finally fired up. Victims this year included Otago Branch of the Vintage Car Club spokesman Tony Devereux, who failed to get his Dodge going.

A 1915 Cadillac owned by former All Black John Callesen travelled from Palmerston North for the event, while other vehicles came from as far afield as Masterton, Blenheim, Nelson and Invercargill.

However, the vanguard was reserved for the eight vehicles which attended the inaugural 1955 rally, including the winner, a 1914 Humber, and the oldest entry, a 1900 Wolseley, which has attended all 60 rallies.

Veteran cars must have been built before 1919 to be eligible for the event, which is the oldest veteran car rally in the southern hemisphere.

The colourful procession threaded its way out to the Brighton Domain for the Brighton Gala Day, which was a sea of colour, with fairground games, bouncy castles, a magician, fortune tellers, rides, food and demonstrations by emergency services and the Otago Regional Rescue helicopter.