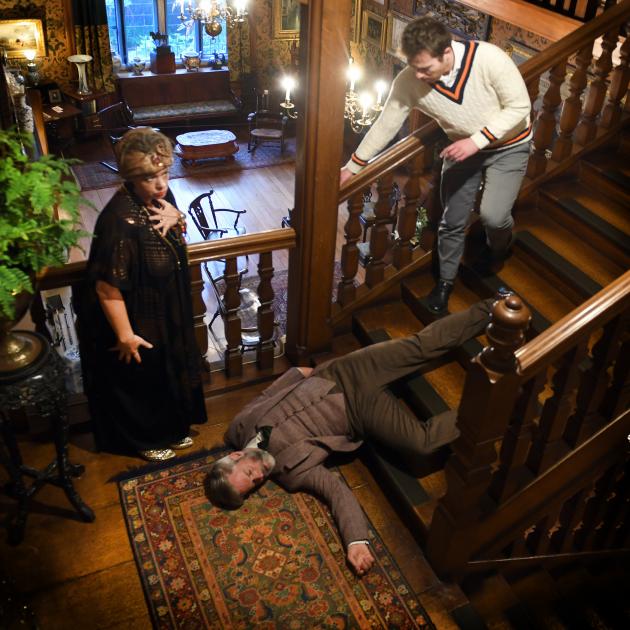 Trickster actors (from left) Harriet Moir, Danny Still (on the floor) and Simon Anderson rehearse for a murder-mystery night, to be held at Olveston. PHOTO: STEPHEN JAQUIERY
There has been a murder at Dunedin’s historic Olveston house - and it will not be the last.

Now it is up to Dunedin residents to work out who is committing the crimes.

Olveston manager Jan Davies said the facility was holding murder-mystery evenings on December 4 and December 11, as part of its bid to mitigate the impact of the international tourist void.

Mrs Davies said 80% of Olveston’s clientele had been lost because the Covid-19 pandemic meant cruise ship passengers and international tourists had not been able to visit.

"So we need to do the most that we can, to support ourselves.

"When you take away 80% of your income, that is why we are having to look and dig deep, and work harder than ever, to really look after and woo our local market.

"That won’t cover the 80% of revenue lost, but it’s really about trying to make the most of a dim situation.

"It’s at least enough to keep employees in paid jobs. We haven’t had to let anybody go."

She said other new initiatives being held at Olveston to attract domestic tourists included having weddings, dinners and/or drinks and nibbles in the Great Hall, the dining room and the billiards room.

"We had a wonderful evening recently for the New Zealand Brain Tumour Trust, where the men were entertained upstairs by two professional billiard players, and the ladies had a fashion show downstairs.

"This is more of a boutique venue, as you would well imagine, being Olveston.

"So for those corporate evenings, those events where people want to wine and dine and woo their clients, this is ideal."

Mrs Davies said the facility had also received a grant from the Edward Theomin Charitable Trust, to educate primary and intermediate school pupils about the historic house over the next two years.

Letters went out to schools this week, inviting them to bring pupils on tours through the house, she said.

For those schools that were unable to visit the house, Olveston was taking the house to them.

"We have 3D images of the house, so the whole house can be viewed right there in the classroom."

She said the initiatives used the house to its fullest - the way the Theomin family (the original owners) would have wanted.

"We’re hoping that in 2021 and 2022, we’ll have a lot more of Dunedin in Olveston. It’s about reaching out to those locals. It’s about getting them involved.