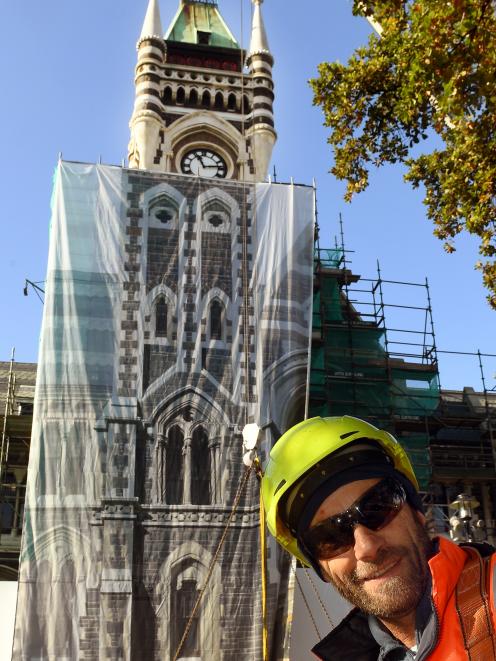 Adgraphix sales consultant Jono Gallacher in front of the clocktower after it was covered by a sheet of printed scrim for the benefit of graduates. Photo: Stephen Jaquiery.
Graduates will be able to get the perfect snap in front of the University of Otago's historic clocktower this weekend thanks to a $5000 sheet of fabric.

Much of the tower's exterior remains covered in scaffolding as the university freshens it up for the first time in more than a decade.

But with graduation ceremonies over the next two weekends, the university opted for a novel solution to make sure graduates do not miss out on photos in front of the university's centrepiece.

That solution involved printing the likeness of the clocktower on a huge sheet of scrim, which was draped over scaffolding yesterday.

A university spokeswoman said the scrim cost about $5000, but was a much cheaper option than removing the scaffolding and reinstating it after the ceremonies.

''We have chosen to print the scrim to help protect our graduands' experience because they like to have their photos taken with the clocktower.''

The scrim could be reused.

So far $210,000 had been spent on refreshing the clocktower, which included repainting window frames and dealing with any loose material found while the scaffolding was up, to keep staff and students safe.

Adgraphix sales consultant Jono Gallacher, who travelled down from Christchurch to help put up the scrim yesterday, said the company had done similar jobs before but never on the same scale.

It did the work by printing the images on 5m by 5m sheets of PVC mesh and welding them together, he said.

It was common for scrim to be put up in Europe when historic buildings were restored.

He believed it looked ''fantastic'' on the clocktower and was money well spent.