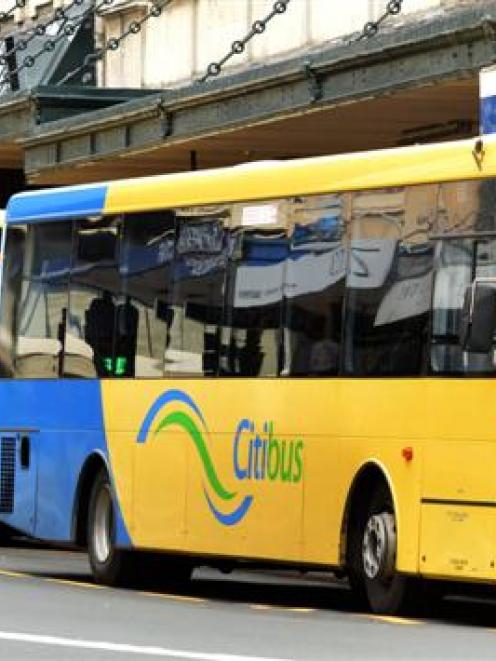 Regional council chairman Stephen Woodhead says Dunedin ratepayers should be "pragmatic and realistic" in their expectations of Dunedin's transport system. Photo by Peter McIntosh.
The first step in a possible change of public transport management in Dunedin has been taken.

The Otago Regional Council yesterday agreed to offer the planning and operation of Dunedin's public bus system to the Dunedin City Council.

It is now up to the city council to decide if it wants to take on the $10 million bus system.

However, even if it accepts the offer, the terms and conditions of the transfer must be agreed by the two parties.

Regional council chairman Stephen Woodhead said the two councils would have to work ''closely and collaboratively'' together if the city council decided to take on the bus system.

At stake was about $3 million in significant projects the regional council had already planned, including replacing the integrated ticket system, a ''real time'' timetable and bus monitoring and other infrastructure changes considered necessary for the ongoing development of the transport system.

Agreement of both parties would also be needed on the location of a ''bus hub'', he said.

''We'll need to work with the city to agree on these things. But we are in a positive frame of mind to endeavour to allow the transfer to take place.''

He warned the city council that operating public transport in a small city was not easy, as it involved many players, from the public and ratepayers to the New Zealand Transport Agency and bus operators.

He warned the community to be ''pragmatic and realistic'' about its expectations of Dunedin's transport system.

Cr Gretchen Robertson cautioned that before any handover there would have to be an assurance the public would be better served by the change.

While regional councillors supported the offer, they wanted to ensure the public did not think the reason behind it was because the system was broken.

Cr Bryan Scott said the council was not embarrassed by the bus system but he believed the city council was a better fit for the transport system.

Cr Sam Neill said the regional council was justifiably proud of the improvements it had made since taking over the buses from the city council as a result of the 1989 local government restructuring.

When he stood for the council, Dunedin's public transport system had been the ''laughing stock'' of the town but the regional council had steadily improved the system, Cr Michael Deaker said.

''How the DCC would go we don't know. That troubles me a bit. I'd hate to think it would take a backward step of any sort,'' he said.

Dunedin Mayor Dave Cull said the city council would now have to formally consider the offer and no timeline for doing so had yet been sought.

If it did agree to, there would have to be a public consultation process and an agreed transitional arrangement.

He personally favoured the city council's taking on the bus system because of the synergies with other council activities such as parking and cycleways, which would enable it to look ''holistically'' at the whole system.