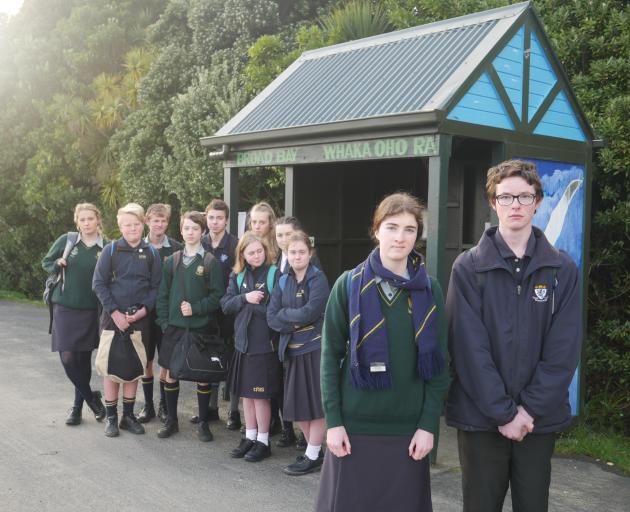 Tahuna Normal Intermediate, King's High School and Queen's High School representatives at Wednesday's council meeting were shocked and angered by the council's refusal to "tweak" public timetables and routes to make it safer and more user-friendly for pupils.

Tahuna Normal Intermediate principal Tony Hunter said the schools were now investigating other options for the future, but believed they were diminishing quickly.

"We're encouraging our communities to write to the council and bring this issue to their attention.

"We're angry and disappointed at the council's decision. We're not asking for the earth, we're just asking for some minor changes.

"Really, it's to their benefit to have full buses - there must be a financial incentive for them to have a full bus. It appears they just don't care."

He understood making changes, such as redirecting bus routes, could make major changes to timetabling.

"But we were only after minor changes - just a slight route change and timetable changes."

He said the existing network did not meet the needs of pupils using the public bus service.

"I was at pains to point out that the kids are also commuters. It is not a school bus service and all we're saying is we want a reasonable public service that meets the needs of all our commuters.

"For our kids, the drop-off point is a 1.7km walk to school. It's similar for King's and Queen's.

"There are 124 pupils that could access the peninsula service to King's, Queen's, Tahuna and Bayfield, and we're all not getting an adequate service at the moment.

"There are safety issues with our kids having to cross seven intersections, and with winter coming on and them having to negotiate snow, ice, hail and walk into a southerly gale . . ."

An existing charter service was proving too expensive for schools to continue into term two.

The ORC appears to have back-tracked a little since Wednesday's meeting.

Corporate services director Nick Donnelly said the council would review the timetable to see whether adjustments could be made, to better meet the needs of school commuters from the peninsula.

"If changes result from this review, we envisage implementing these at the same time as the bus hub becomes operational."

However, parent Jason Graham said the hub was months away, and the issue needed to be dealt with by April 30 when term two begins.

He said he was one of 124 families, caught between "a rock and a hard place", trying to work out how they would get their children to school safely.

"This really angers me.

"Our 11-year-old boy has really enjoyed his freedom in catching the bus to and from school - he loves it. We don't want to take that away, but we don't want to risk him walking 25 minutes . . . across several busy intersections at rush hour, especially in winter and on wet days. He'll arrive at school like a cold, drowned rat.

"I find some of the views expressed by the councillors quite defensive - as in, pull down the shutters - factually incorrect, and certainly not in the public interests that they're supposed to be representing."

Peninsula Community Board chairman Paul Pope believed the tweaks to the schedule were "rational, realistic and pragmatic".

He challenged the councillors who voted against making changes to take the bus from Portobello, get off at the bus stop and make the 1.7km walk to Tahuna Intermediate, to experience what pupils were going to experience this winter.

Go for it kids! Its time the Otago Regional council and the NZ Transport Agency realised that PEOPLE matter and public transport should be just that.

This has gone too far without careful consideration, as should consider all the risk and factors.

I haven't followed this all along. Don't give in keep it up and protest to get what you need and want. Also please encourage your parents to assist, not only with this but with stuff the DCC does wrong and needs to be accountable on other topics, please keep in mind you guys are the future of Dunedin, please encourage the older generations to get out as well. They will not like this because it will attract negative press - so own it and do it, be peaceful and respectful