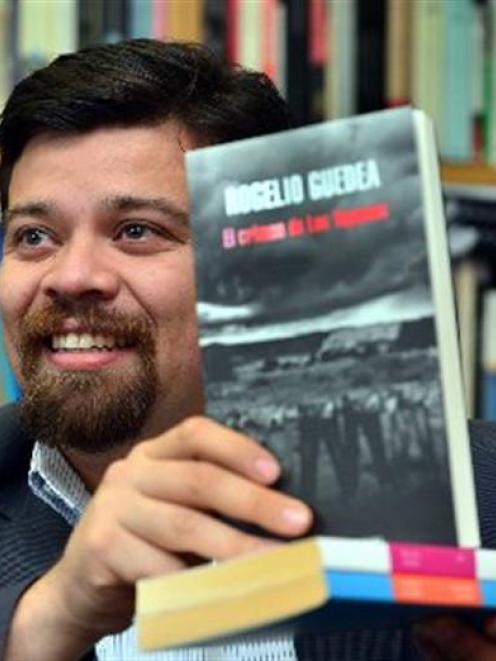 Rogelio Guedea. Photo by Peter McIntosh
University of Otago lecturer Dr Rogelio Guedea is living a double life as a top author in Mexico, with his most recent novel among the five best-selling books in that country.

Dr Guedea's novel El Crimen de Los Tepames or The Crime of Los Tepames, the final in his trilogy centred on crimes in and around the city of Colima, has hit the bestsellers list in his home country and remains in the top five three weeks after it was released.

The novel, based on a true story, is centred around the murder of two peasants in the town of Los Tepames in 1909. The crime had resonance in Mexico to this day, because many - including Dr Guedea - believed the governor of Colima was behind the crime and that the pair were killed for the gold on their land.

Dr Guedea was ''delighted'' about the novel's reception, which he put down to factors including the popularity of the previous two in the trilogy and that the crime remained well known.

The novel also embraced Mexican popular culture and showed a rural side of the country, which had been neglected by other authors.

Dr Guedea credited much of his success to living in New Zealand and believed he would not have been able to write the trilogy had he stayed in Mexico, with the decision to take up a job at Otago University in 2005 coming at a time when he was suffering from writer's block.

Seeing Mexico from a ''distance'' gave him a clearer view of the country, he said.

''I could understand many ... nuances that I couldn't see when I lived in Mexico.''

Otago University had also given him a six-month sabbatical to finish the last novel, for which he was very grateful. The novel involved painstaking amounts of research, as there were differing opinions among historians as to whether the governor was the mastermind behind the murders.

After two years of careful research, Dr Guedea came to the conclusion the governor was the mastermind, which is a key part of his book. His research involved reading pages and pages of criminal records from the time, where Dr Guedea's experience as a prosecutor for the Mexican government came in handy.

At the time, it remained unknown whether the governor was behind the murders, partly because a detective appointed by the then president to investigate the crime was discredited after being accused of suffering from paranoia.

The first of the trilogy, Driving a Truck, was about to be published in English, which he was ''very excited'' about.vaughan.elder@odt.co.nz