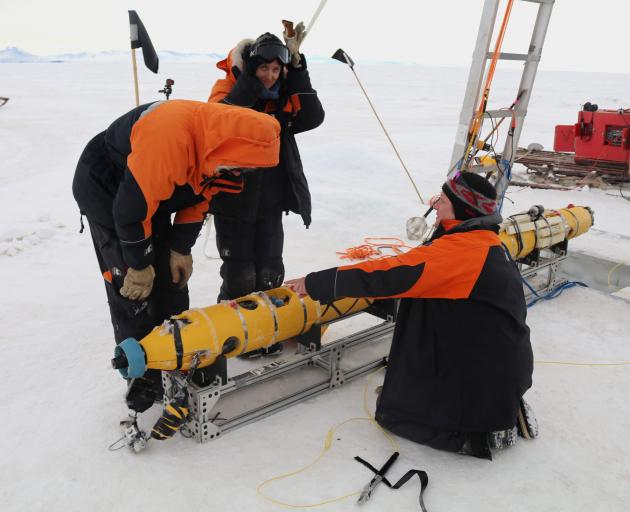 Inspecting frazil that has formed on Icefin during research of the supercooled water under the Ross Ice Shelf are (from left) Lars Smedsrud, of Norway, University of Otago physicist Inga Smith, and Britney Schmidt, of the United States. PHOTO: ANDY MULLEN
Measuring temperature variations in supercooled ocean water under the Ross Ice Shelf may hold the key to informing New Zealand’s future weather forecasts.

University of Otago researchers have teamed up with Norwegian and United States scientists to build a high-precision supercooling measurement instrument that can go below the ice on a small, remotely operated submersible robot called Icefin, to measure exactly how cold the water gets.

University of Otago physicist Dr Inga Smith said sea ice usually froze at -1.9degC, but that was not the case when fresh water flowed from beneath an ice shelf and mixed with the salty seawater.

‘‘Then it becomes what’s called supercooled, so it’s still liquid but actually below the freezing point.

‘‘It then snap freezes into these crystals called frazil, they attach to the sea ice and form platelet ice.

‘‘That means the sea ice in this area is thicker and grows faster than it would otherwise, certainly thicker and faster than you would expect in the Arctic, for example, in a similar location.

‘‘We’re really pushing the edge of polar engineering here, operating in these really cold temperatures and making high-precision measurements of that supercooling.’’

‘‘We know more about the dark side of the moon than we know about what’s going on underneath the Ross Ice Shelf.

‘‘These measurements help to inform understanding of how the system that is the ocean, the ice and the atmosphere works together ...

‘‘Particularly when it has such important ramifications for the rest of the planet.’’