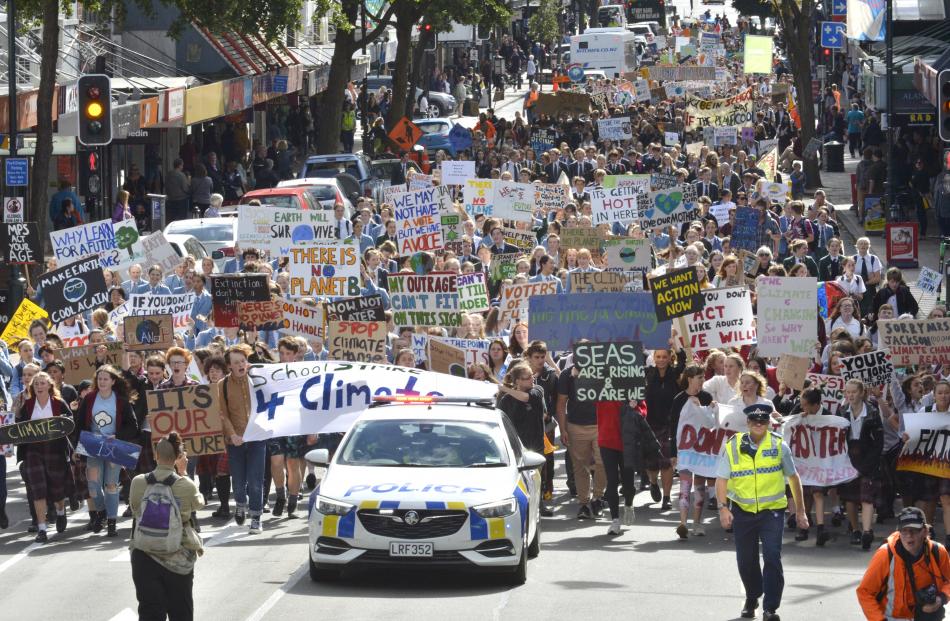 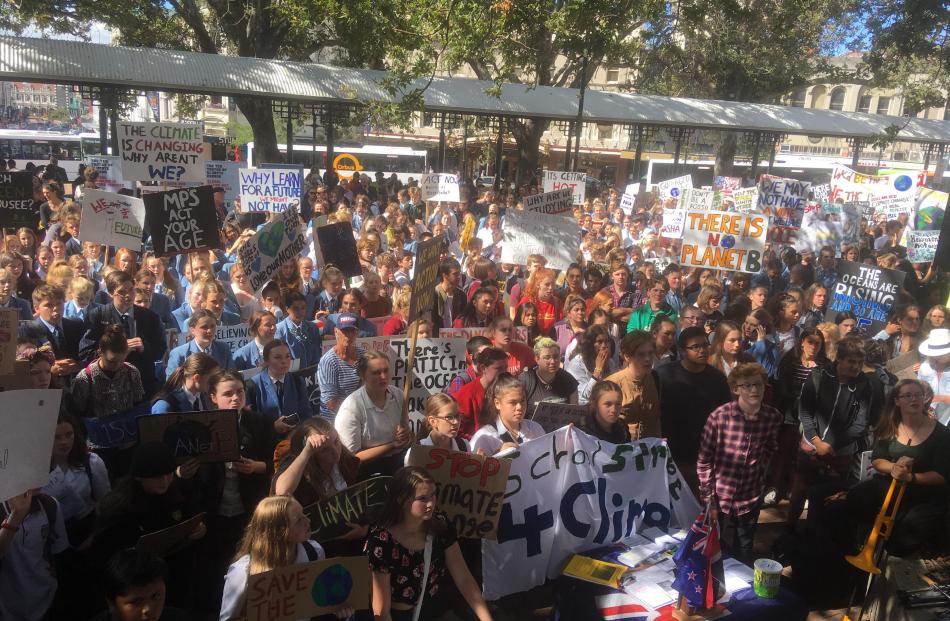 Dunedin pupils holding placards have gathered in the Octagon today as a part of the global Strike 4 Climate. Photo: Jono Edwards 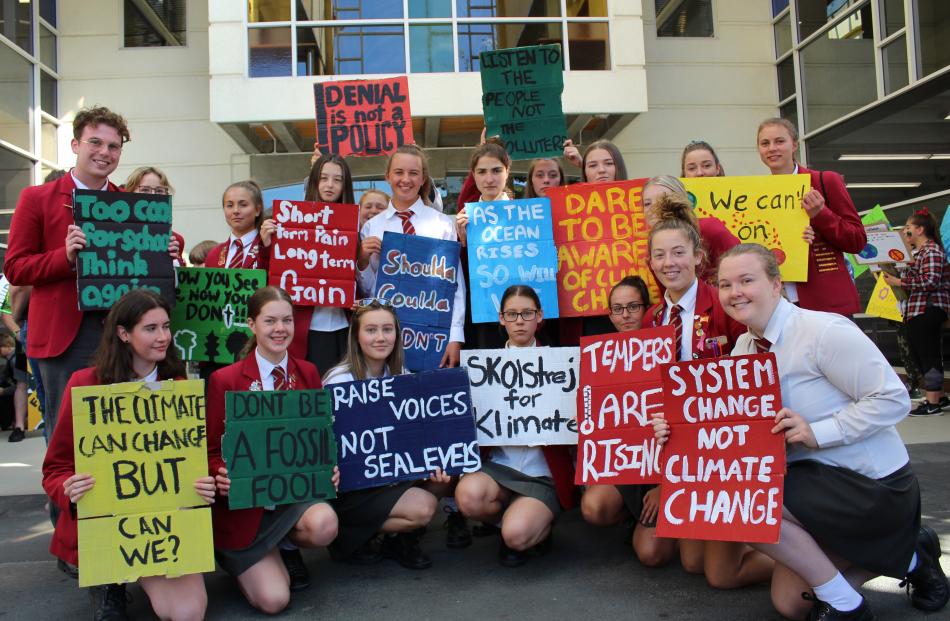 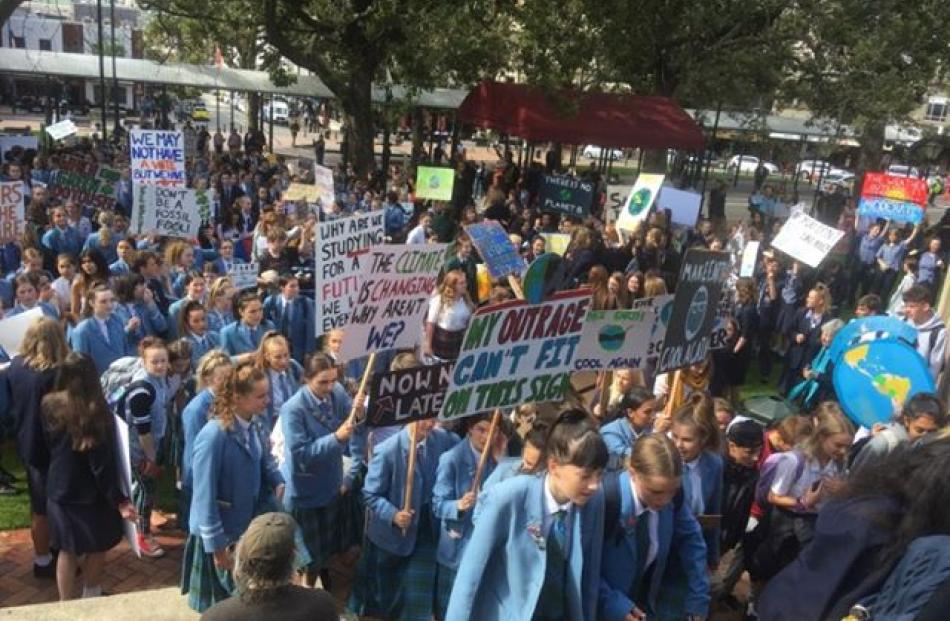 Thousands of Dunedin school pupils have made their way to the Octagon to protest inaction over climate change. Photo: Jono Edwards 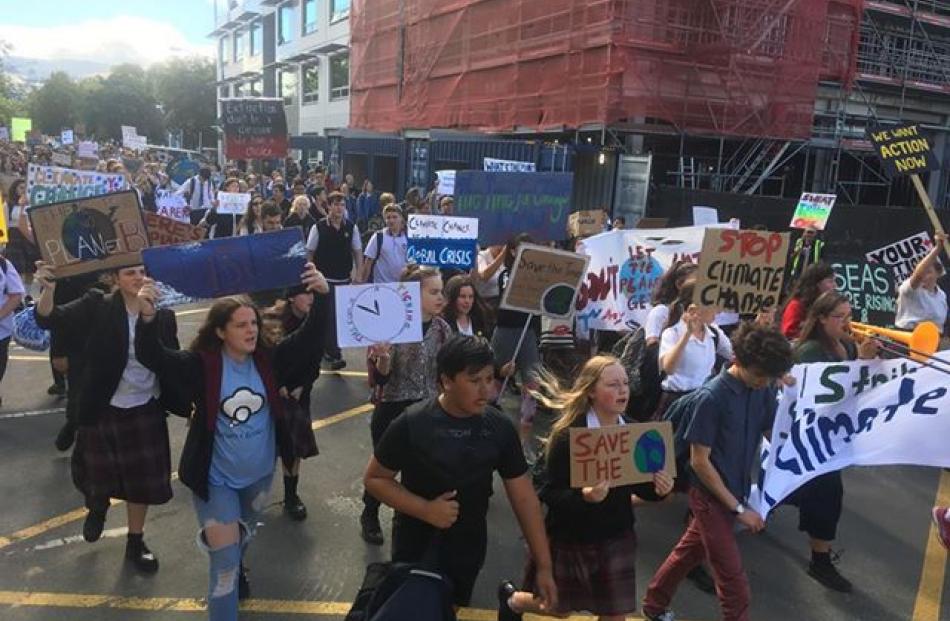 The crowd of picketers made its way down the made street of Dunedin chanting and waving placards. Photo: Jono Edwards 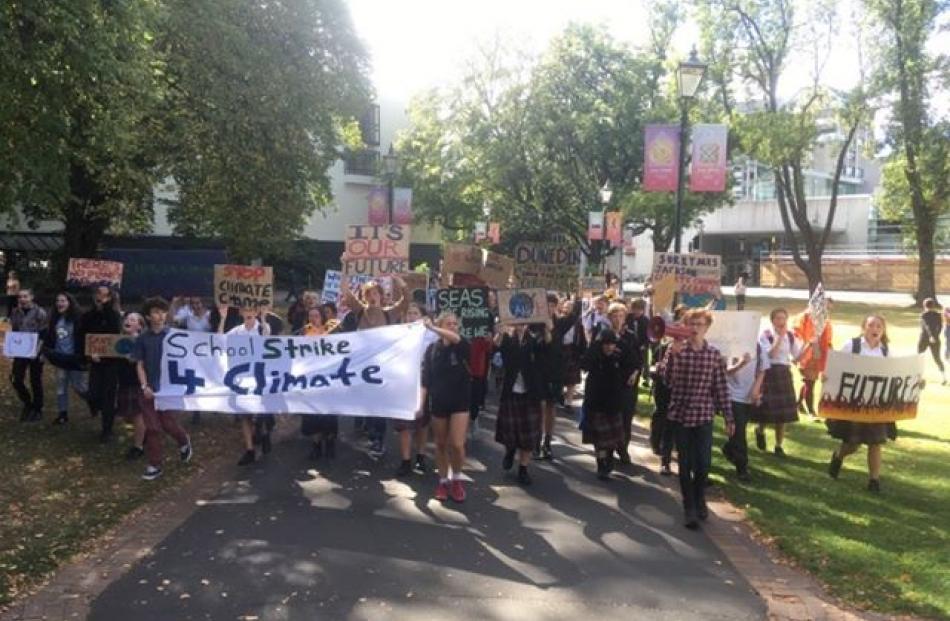 Protesters have gathered around the region today to march for School Strike 4 Climate. Photo: Jono Edwards

Pupils from several schools in main centres around the Otago region are marching today over climate change.

Over 1000 Dunedin school pupils are calling for action to stop climate change before it is too late.

The crowd of protesters were chanting "What do we want? Climate justice. When do we want it? Now!" as they marched down George St.

The flock of protesters started gathering at Logan Park High School earlier this morning and started picking up more protesters as the group passed by the university and made its way through the city.

The protesters were escorted by police as the crowd made its way to its destination in the Octagon.

Bayfield High School pupil Emilia Haszard (17) said she went on strike today because the Government was not doing enough to save the planet.

"This is not a sustainable way to live and we need to make a difference."

Co-organiser Zak Rudin (16), of Logan Park High School, told the crowd that as pupils they were not able to vote so this was the most efficient way to have their voices heard.

The turnout was "amazing", he said.

"It's exceeded our expectations. It's overwhelming the amount of support we have."

School pupils and members of the public in Wanaka, Queenstown and Cromwell were also marching today.

Thousands more Kiwi pupils have today swapped pens for placards as they march the streets for action on climate change.

Protests are under way in city centres around New Zealand - and the globe - despite many schools warning that absent students will be marked as truants and could face punishment.

Hundreds have arrived at Parliament, many holding signs and banners. Wellington Mayor Justin Lester is among those in the crowd.

"We need adults to listen to the young people and the facts - this is our future," Isla Day, one of the Wellington organisers, told a crowd of more than a thousands outside Parliament.

Prime Minister Jacinda Ardern, who fronted a live chat with students in Wellington this week, sympathised with the urgency behind the worldwide School Strike 4 Climate.

"Ultimately it's between students, parents and schools . . . but I think young people are genuinely worried about climate change and are looking to today's politicians to make the right decisions to combat it," she told the Herald.

The issue all the media reports seem to be focusing on is whether school students should be able to strike, to protest, and to take the day off.

The real issue is our politicians are pussy footing around the most major catastrophe, from humanity's point of view, of the last four billion years.

David Lange took an international stand on nuclear warships in our waters. We need some politicians with the guts to stand up now on climate change. The dairy, meat, and petrochemical industries are especially powerful lobby groups whose profits will be annihilated by effective action against global warming. We need politicians standing up to these industries now to protect the planet for our children.

It is fantastic seeing the students becoming active.

Let's hope we start to see some effective action from the politicians.