Out or up? City plans its boundaries 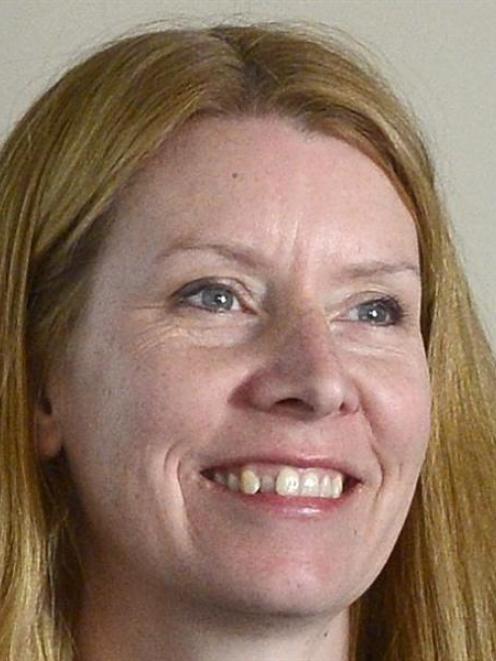 Anna Johnson
Auckland's housing problems are topical, not least because housing became a prominent issue in the Budget as a result.

Much further south, Dunedin faces its own housing issues and the city council has a plan to deal with them- restricting development to within the city's urban limits and stopping more subdivision at its rural fringes to keep the city affordable to live in.

But some people do not think this is the best way to go about it. Debbie Porteous takes a look.

The Dunedin City Council has a plan for Dunedin's housing stock.

It says the affordability of home ownership in Dunedin will creep up if the city continues to sprawl, increasing not only personal transport costs as homes become further away from the city centre, but making the whole city more expensive to maintain and service to the same level as a more compact city.

The council also says there will not be the range of homes available around the city to cater for what is becoming an older and less well-off population.

It has a plan is to put limits on development to address those issues.

But developers say further restrictions, aside from the current costs and regulatory requirements, on development on the rural fringes of the city will eventually reduce the overall prosperity of the city, because the ''right sort of people'' will not be able to find housing that suits them.

Should Dunedin expand out, or up?At the highest, strategic direction level, the council has already more or less decided.

The city, according to the council's spatial plan, should expand up. 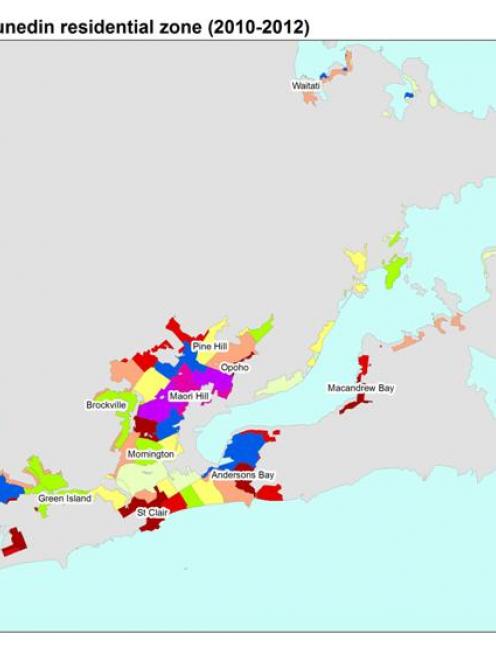 Click graphic to enlarge
The plan's premise is that Dunedin should be a compact city, with the townships around it maintained and resilient.

To achieve that, urban sprawl should be curtailed and all urban land should be developed before consideration is given to the expansion of urban limits.

In general, the expectation is that most development will occur in the main urban area of Dunedin, using land more efficiently. That would include more mixed-use residential development in the central city and suburban centres and residential intensification.

There would be no more development of greenfield (totally undeveloped) sites outside that area, beyond what is already under way; no more, or severely limited, rural-residential zoning; and the city's edge could be zoned residential only, ensuring a higher density of housing.

The limit of urban development would be defined by an urban-rural boundary.

Inside that, there would be more housing choice, primarily stemming from well-designed residential intensification in more areas of the city.

The spatial plan, signed off by the council last year, is not legally binding and carries little to no weight in the consenting process, but it guides the city's future development rules, which will be set out in a revised district plan. But some people are not happy about the direction chosen.

They call the council's plan social engineering, or a stab at it anyway, say it could result in a bad image for the city and that it goes against the Productivity Commission's call to free up more land on city fringes for home-building.

In Auckland, where the population is growing exponentially and home ownership is already out of the reach of many, this clash is playing itself out already.

There, the Government locked horns with the council over its unitary plan for addressing housing affordability issues.

The council said build up - its plan to increase intensification, including building apartment blocks in suburbs, to give Aucklanders more choice.

It wanted to contain about two-thirds of new housing (280,000 new homes) within the existing urban limits and release new land for 160,000 new homes in rural areas as needed over the next 30 years.

But the Government said build out.

Housing Minister Dr Nick Smith accused Auckland Mayor Len Brown of ''killing the dreams of Aucklanders'' and said the city's planning rules had a stranglehold on the city by driving up house prices. The minister wanted to open up more land outside the existing metropolitan urban limit to peg back land prices which, he said, were the biggest factor putting home ownership out of the reach of many.

Last week, they met in the middle and on Thursday the Government passed special legislation that would enable 39,000 new houses to be created by Auckland Council in the next three years, by overriding restrictions on housing, like the metropolitan urban limit, put in place by Auckland's eight predecessor councils.

The Auckland Council is still concerned, however, that the legislation is emphasising development on rural land, although the Government says it is only wording and that can be easily fixed.

In Dunedin, things are not as far down the track and the urgency is not the same.

The spatial plan was developed following extensive public consultation and over the next year or more city planners will draft the new district plan, in consultation with the public, including details such as the future allowable development density for the city and where the urban/rural boundary should be.

Those opposed to the compact city approach say it will either push up property values in the city because of the development limitations or reduce them because of the loss of amenity and quality, ultimately affecting the city's prosperity.

They say most Kiwis would rather live on a stand-alone property on a quarter-acre section, many dream of a lifestyle block, and that the council has an ''absolute social and moral obligation'' to provide for this dream and to make it as affordable as possible.

Construction Industry and Developers Association chairman Tom Richardson says he understands the council is worried about the inner city deteriorating, but he has a warning.

''If you do not have the plan designed for development and prosperity, you of necessity have a poorer socio-economic status as a city.

''Not everyone wants to live on a back section. Like-minded people like to be in like-minded areas.''

Development is a demand and supply business. Developers generally need to see the demand before they supply and at present the demand for new housing in Dunedin is for properties on the urban fringes, he says.

Dunedin has a problem in terms of renewal, vitality and growth and housing choice has to include the option of choosing sites in the city's most attractive places, if the council wants the city to remain desirable.

''Affordability and choice - we need both.''

What Dunedin really needs, according to Statistics New Zealand estimates, is another 7700 dwellings by 2021.

Based on predicted demographic changes, which will see the city's population grow older and less well-off, the available housing stock will need to include small one and two-bedroom apartments, as well as the large stand-alone houses generally associated with greenfield development.

The city council says there are already 7043 vacant sites within the city's urban area and another 8094 sites that could be created through subdivision under current district plan rules.

Even when just over a-third are excluded for having development constraints, that still leaves plenty of potential sites.

There are enough available sites to mean Dunedin will never be at risk of proliferation of the apartment-block-type development expected in Auckland, the council says.

It was reported earlier this year that Dunedin was already one of the least affordable cities in the country for housing, but the council says that is not correct and, actually, Dunedin has relatively affordable housing compared with other New Zealand centres, which should be a big selling point for the city.

City development manager Dr Anna Johnson says there is another way to interpret the statistics.

The Demographica calculation, Dr Johnson says, not only overlooks the high proportion of low-earning students, which is likely to affect the mean household income, but also the high demand and rental returns from students, which pushed the median house price in the university area up to $428,007, significantly higher than the Dunedin median.

Both sets of figures were likely to skew the outcome.

In fact, QV sales summaries from the last quarter of 2012 showed Dunedin mean house prices were substantially lower than in the comparably-sized cities of Tauranga, Hamilton, Napier and Hastings.

This was noted in a report the council commissioned from The Property Group in 2011, which ranked Dunedin as one of the most affordable cities in NZ for those aspiring to own a home.

Comparing the affordability of housing based on house pricing may be misleading too, because incomes vary across the country, but the latest housing affordability index released by Massey University, which considers the cost of housing in relation to the household income, shows affordability within Otago, excluding Queenstown Lakes District, is equal to the Manawatu-Wanganui region, making it the second-most affordable area of the country behind Southland.

Within Dunedin, council records show the houses that commanded the highest mean prices ($435,638 to $351,665) from 2010-12 were in Maori Hill, the university area, Roslyn-Belleknowes and St Clair.

The lowest mean prices ($175,908 to $217,322) were fetched in South Dunedin, Caversham, Port Chalmers and Green Island-Abbotsford.

Whether land release for greenfield development would lead to more affordable housing in Dunedin is a contentious question, Dr Johnson says.

Much of the recent greenfield development in Dunedin has been in Mosgiel and Fairfield, which are among the more expensive locations in the city, well above the mean sale price in Dunedin of $278,916.

Furthermore, based on government estimates, a small house costs about $253,360 to build in Dunedin excluding the cost of the land, suggesting that housing developments on greenfield sites are not likely to be available to households on lower incomes - a key issue the council expects to have to deal with.

The council takes into consideration several significant factors when deciding where additional urbanisation will be created, including the capacity of infrastructure, she says.

The council says research has shown the cost of providing infrastructure and services to residents in new developments could be as much as twice that for new structures on redeveloped city sites.

There are also natural hazards, high-class soil and biodiversity considerations.

Even though more housing will be needed in Dunedin, the council sees the bigger housing issue it needs to deal with as the type and quality of houses.

The city's houses are old and cold, and much of the housing stock is designed to suit families and has three or more bedrooms and large gardens, whereas the demographic trend of the city is towards smaller households and an ageing population.

That means that overall the biggest shortage in the future is likely to be for small, modern, energy-efficient and warm houses, with much smaller gardens or alternative open spaces, e.g. shared spaces, balconies, roof-top gardens in handy locations close to shops, services and transport.

And that is what the council plans to see more of.