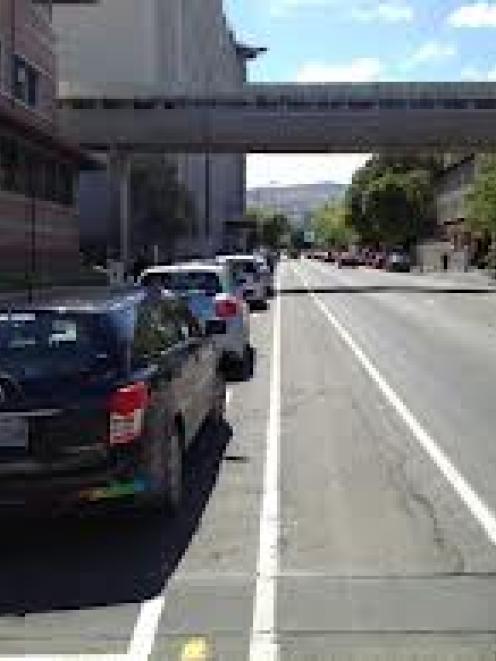 The cycle lane outside Dunedin Hospital where cyclist Dr Li Hong ''Chris'' He (34) was killed last year. Photo Spokes
Dunedin's central city parking is in for a shake-up as part of a push to improve cycle safety on the city's one-way streets.

Dunedin City Council staff have confirmed changes to on-street parking along Cumberland and Castle Sts, including removing some parks, modifying others and adding new parks in other locations.

The reshuffle will mean at least 81 individual changes across 17 sites, and possibly more, although the net result will be the loss of just three parking spaces from the city, a report by council transportation planning manager Sarah Connolly said.

Instead, there will be six more all-day pay-and-display spaces in new locations, but nine fewer P5 parking spaces, which are popular with nearby businesses.

The most significant changes would occur outside Dunedin Hospital, in the area where cyclist Dr Li Hong ''Chris'' He (34) was killed late last year.

Dr He was using Cumberland St's on-road cycle lane when he was run over by a stock truck and trailer unit after being knocked from his bike by an opening car door.

The switch to longer stays would reduce the number of vehicles crossing the cycle lane to reach or leave the parks, and reduce the opening of car doors.

Spokes Dunedin secretary Dr Robert Thompson told the Otago Daily Times yesterday the improvements were ''a good start''. He was impressed with the approach taken by council and New Zealand Transport Agency staff and the co-operation of businesses.

He was looking forward to hearing more about long-term solutions in the central city, which were yet to be confirmed.

Dr He's death was the most recent fatality involving a cyclist on Dunedin's one-way state highway network, and prompted the council to write to the NZTA seeking urgent action.

That had already led to cycleways being widened in places and improvements to the intersection of Castle St and Anzac Ave, near the Dunedin Railway Station, where a cyclist was killed in November 2011.

Collaboration was continuing between council and NZTA staff, together with cycling group Spokes, to identify short-term improvements along the one-way streets.

That was intended to suffice until a longer-term solution - in the form of a new central city cycleway plan - was agreed on later this year.

Ms Connolly's report was an update on progress to date and would be considered at Monday's full council meeting.

She said NZTA staff had identified five additional sites where bollards would be installed to discourage motorists from crossing into cycleways, such as were already in place near the Leviathan Hotel.

Areas had also been identified where the road seal had built up over time, and needed to be milled down to encourage motorists to park closer to the kerb, she said.

In the longer-term, Ms Connolly's report warned, further parking changes might be required on the one-way streets, with a ''significant'' number of parks to go.

NZTA staff did not want to proceed with ''wide scale'' removal of parks until the council selected a preferred central city cycleway option for longer-term improvements.

The council was already consulting on a $4.5 million plan to improve the cycling network in South Dunedin, and would eventually link that to an improved central city network.

At a workshop next month, councillors would consider five options for the central city and further parking changes could result, depending on the preferred option, she said.

It was not yet known what funding was available or when work would proceed.

Short-term improvements identified by NZTA would cost the council $11,000 in signage, road marking and meter moves, and reduce the council's parking revenue by $50,000 a year.

Consultation had been carried out with 23 organisations affected by the proposals, and a majority - including the Southern District Health Board and Public Health South - supported the changes, Ms Connolly said.

While 81 changes across 17 sites had been agreed, proposed changes at a further eight sites were yet to be confirmed and consultation was continuing, she said.