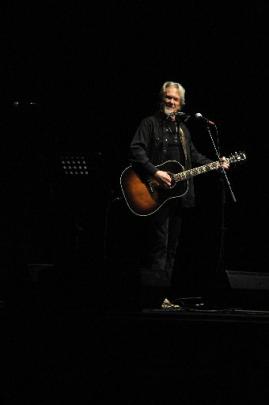 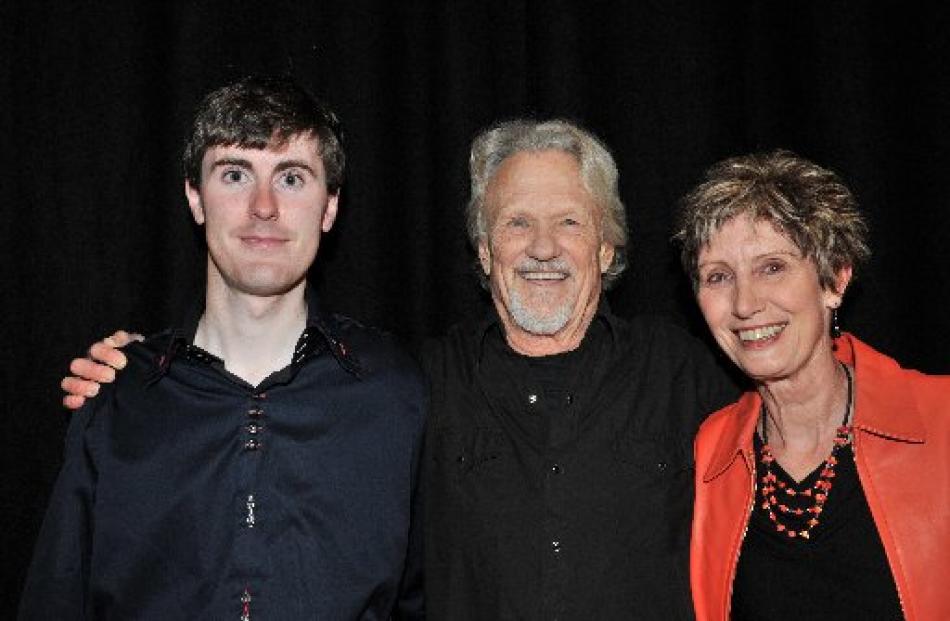 Kristofferson with Dalaine Walker and her son, Kris Collins, on stage earlier in the night. Photos by Linda Robertson.

Not only is the 22-year-old named after the Country Music Hall of Famer who played at the Dunedin Town Hall last night, but he is also a keen country musician himself and often covers Kristofferson songs.

He told Kristofferson he particularly loved his song Me and Bobby McGee.

''It's amazing, a real thrill,'' Mr Collins, of Dunedin, said after the brief meeting.

Because of a chance meeting 23 years ago, Kristofferson (77) made an exception to his rule of not meeting anyone before a show to talk to Mr Collins and his parents, Dalaine Walker, of Oamaru, and Dunedin radio host and former city councillor Neil Collins.

The story is Collins' family folklore - how Neil Collins and then wife Ms Walker, who was heavily pregnant at the time, met Kristofferson in a hotel lift and got talking about babies.

Ms Walker said the couple had attended a concert by the Highwaymen (which included Kristofferson) at Athletic Park in Wellington in June 1991.

It had been a tough day, as she was eight months pregnant, but as a Kristofferson fan she had not minded, especially when they ended up riding the lift at their hotel with the musician.

The star was holding his baby daughter Kelly - who sang with her father last night - and he commented about Ms Walker's pregnancy, saying if the baby was a boy, the couple should call him Kris.

The baby was born on July 14 and while Ms Walker wanted to call him Kristopher, she gave in to her then husband's request that it be just Kris with a ''K''.

''To meet him then was fantastic. Tonight brought back very good memories. The years have just flown by,'' Ms Walker said.