Patience pays off in pursuit of love 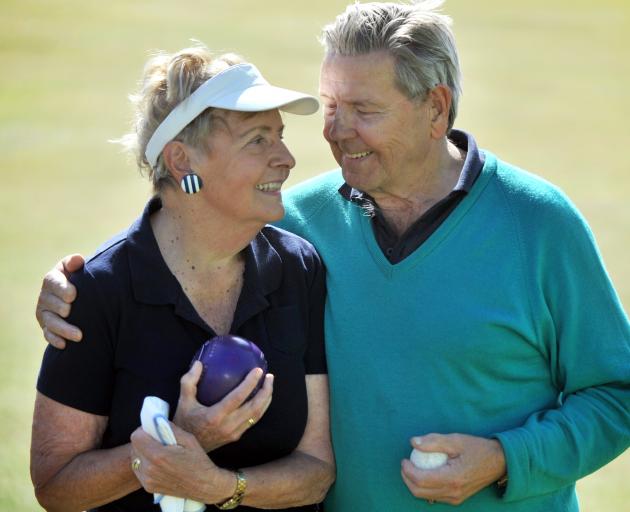 Jan (80) and Jack (85) van Zanten, of Dunedin, celebrated their 60th wedding anniversary yesterday by playing bowls together. PHOTO: CHRISTINE O'CONNOR
Jack van Zanten is the first to say tact has never been his strong point.

Lucky for him, he does possess some patience - for the right people.

In 1951, Mr van Zanten came to Dunedin from the Netherlands as a plucky 18-year-old, to find a better life and maybe meet the love of his life.

It was a year later, while out walking, that he passed a telephone box where he saw a young Jan Manhire talking on the phone.

"I said to my cobber as we walked past `that's the girl I'm going to marry'."

But after some covert investigation through friends of friends, he found out she was only 14 years old.

"I saw her a couple of weeks later in her school uniform.

"So I sort of pulled my horns in a bit."

It was not until more than a year later that Mrs van Zanten (nee Manhire) realised Mr van Zanten even existed.

She said they were both at a dance hall and Mr van Zanten came out of the blue and asked her to dance.

"He was quite nice - quite yummy," Mrs van Zanten said.

Despite her fondness for him, she said her parents warned her about "that van Zanten boy".

He had a habit of telling people what he thought, in no uncertain terms.

"My mother once pulled me aside and said he needed a four-lettered word. Tact."

Parental concern aside, the couple fell in love, eventually got engaged and were married on April 4, 1959, at the Roslyn Presbyterian Church.

"And for the last 60 years, I've wished he was more tactful. You know where you stand, I guess."

Mr van Zanten said it was the Dutch way.

The couple said their marriage remained strong because they had battled a lot of adversity over the past six decades, including the death of one of their two sons in a car accident in 1978.

It had brought them closer together, Mrs van Zanten said.

Mr van Zanten said it was also because they had worked hard at their marriage.

"The way I've looked at married life is this - You make your bed, you lay in it.

"You get married and you think everything is a long tar-sealed road that is beautiful.

"And after a few years, you get a few potholes. And if you don't fix the potholes, they get bigger.

"You have to keep fixing them. That's how we've managed to stay together."

Asked if he had become more tactful with age, Mr van Zanten said: "I don't know. Ask the boss."

It seems a spade is still a spade, and Mrs van Zanten would not have it any other way.