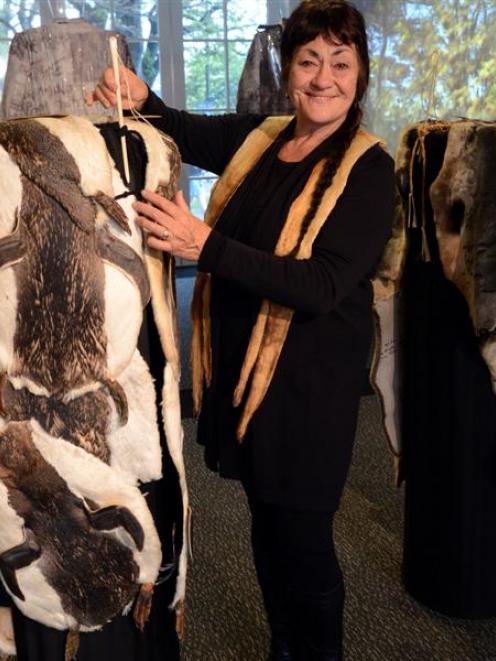 Roka Hurihia Ngarimu-Cameron with her cloaks made of yellow-eyed penguin skin (left) and seal skin. Photo by Linda Robertson.
Garments made of penguin and seal skins on display at Otago Museum may have drawn gasps from some onlookers, but the project was all about respect, their creator says.

The traditional Maori cloaks and shawls, made using skins of Otago and Southland yellow-eyed penguins and seals, are part of the museum's art and design exhibition in the HD Skinner Annex.

Weaver Roka Hurihia Ngarimu-Cameron said the purpose of her project was to show respect for the animals and honour the traditions of Maori ancestors, who used the skins to keep warm.

''It's about respecting the bird,'' she said of the penguin-skin cloak.

''Otherwise you just bury it and it just decomposes, these beautiful birds of our shores.''

The art pieces told a story of the animals' lives. One penguin skin still displayed a shark bite which led to its death, she said.

The animals died naturally on beaches and were used for research by University of Otago students.

The former university lecturer in Maori traditional art came up with the idea of making a seal-skinned cloak while studying for a master's degree in fine arts in 2006.

In total, 13 yellow-eyed penguins, one blue penguin and nine seals were used for the art pieces.

The display was called ''Te Hokinga Mai'', which meant ''the return'', as the animals had returned to Otago after being worked on in different locations.