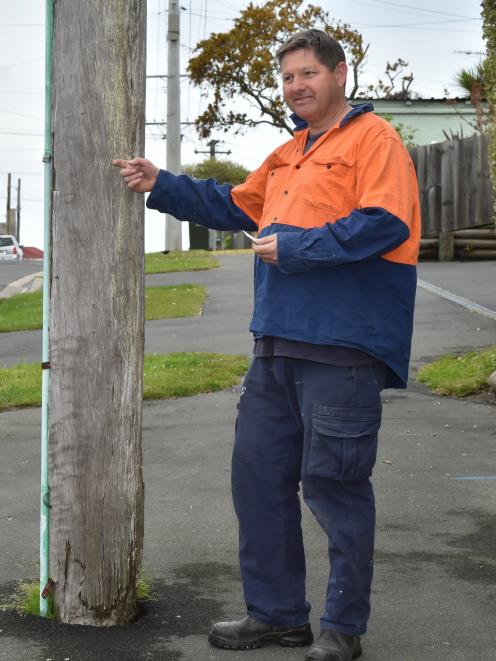 ''It's been bad for at least 10 years; these things don't rot quickly; this doesn't happen overnight.''

The Dunedin man said several poles in his neighbourhood were so old signs warning pedestrians of their high voltage had faded completely.

He was particularly concerned about poles on Tomahawk Rd and beside the Andersons Bay Cemetery.

While some are marked with a red tag to show the severity of their condition, Mr Gotlieb said there were many in a ''shocking state'' that remained untagged.

''With high winds that we've been getting, they'll just come down.''

He said he was worried for the wellbeing of Delta employees, the company responsible for the electricity network in Dunedin.

''Delta is in a high-risk industry and they're not taking health and safety seriously; their employees could die.

''If my mate was to get a job there, my fear is he wouldn't come home alive.''

Eight power poles lining the road beside Dunedin North Intermediate school have been red-tagged. Five are deemed to be ''condition zero'', meaning they are in urgent need of replacement.

The school's principal, Heidi Hayward, said Delta had not been in contact to alert them of the danger their pupils could be in.

She said she hoped the attention given to the issue would result in steps being taken to ensure the safety of all citizens.

''Thus far the focus has been on the Delta employees and them climbing the poles.

''It's awful, but now that there's light being shed on the issue I hope action will be taken swiftly to ensure the safety of everyone.''

Delta did not respond to the specific concerns raised by either Mr Gotlieb or Ms Hayward.