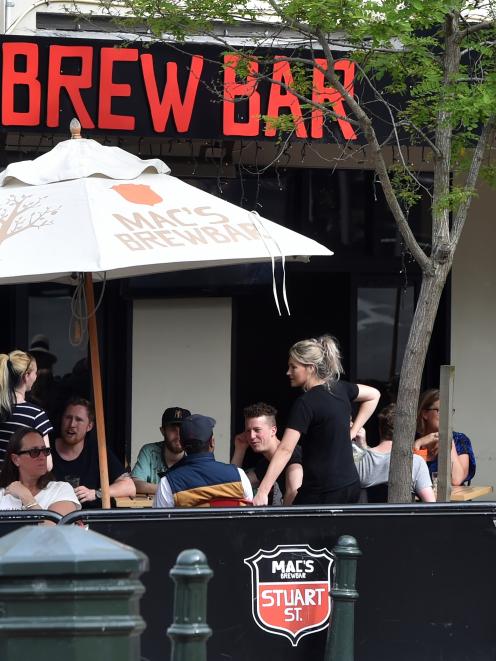 Mac's Brew Bar in the Octagon. Photo by Peter McIntosh
The owners of Mac's Brew Bar want its one-way door policy scrapped but police say it has reduced alcohol-related offences.

The policy, in place at Mac's since a liquor licence renewal in 2012, was a voluntary agreement after several breaches when trading under another name.

It states no-one can enter the bar after 3am but patrons could stay until closing at 4am if they were already inside.

Police alcohol harm reduction officer Sergeant Ian Paulin said police were appealing the application on the basis that Mac's is No2 on the police top 10 alcohol-related offences data list for bars in the Otago coastal area.

The offences, taken from 12 months before November 23 this year, include three assault and three disorder arrests, one trespass and one wilful damage arrest.

''To be ranked this high is a concern for police when considering this application, as it indicates there is a high amount of alcohol-related harm attributed to this premises,'' Sgt Paulin said.

''If police saw a decrease in alcohol-related harm [earlier in the night], then we could support the removal of the one-way door.

Five particular incidents were outlined where police dealt with ''removals of intoxicated patrons''.

Since the one-way door policy was imposed, police had attended fewer incidents at or outside the bar after 3am, Sgt Paulin said.

''From 3am onwards, incidents have dropped but we understand that [before 3am] there has been no drastic reduction.''

He said Mac's had breached the one-way door policy during the daylight saving time change between 2am and 3am this year and in 2012 and 2014.

Public Health South medical officer of health Dr Keith Reid supported police by providing Law Commission Report findings on the one-way door policy that suggested it should be a permanent condition of a liquor licence.

Mac's owner, Richard Newcombe, said the one-way door policy was costing him financially, as most other bars in the Octagon did not have it imposed.

He did not necessarily disagree with the policy but felt it should be a ''blanket policy'', not one that targeted individual bars.

''At the time [of agreeing to the policy], we were under the impression that other premises would have a one-way door policy imposed.''

As well as Mac's, Brimstone, Popbar, RaBar and Suburbia all had a one-way door policy from 3am.

''It does make it difficult ... when you've got people waiting to come in and you have to turn them away.''

He had put in place measures to tighten up on patrons becoming intoxicated, including staff training on better identifying and dealing with intoxicated people, tighter security, more low and non-alcoholic beverages and a wider range of food. Most incidents happened after patrons left the bar and Mr Newcombe felt blaming his bar was unfair as patrons may not have been intoxicated when they left. The bar had an incident report ''book'' that detailed what happened each night but Mr Newcombe did not have it at the hearing. The case was adjourned pending all parties sighting the incident book and answering related questions.

The committee gave Mr Newcombe seven days to circulate the information. A date for a decision was unconfirmed.