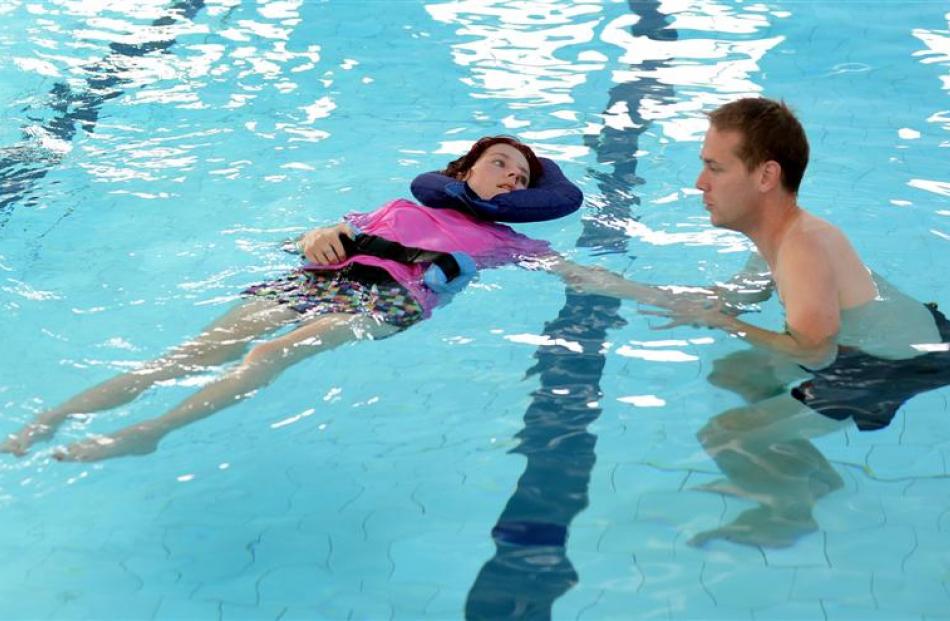 Courtney Donald swims in the physio pool with the help of physiotherapist Mark Shirley. Photo by Peter McIntosh.

It's nearly a year since Courtney Donald's life changed forever in a deadly crash on the Southern Motorway.

The 18-year-old is making solid progress and is able to walk with a frame and assistance.

Regular swims in the Otago Therapeutic Pool had improved her muscle tone and control, and the family hoped for a complete recovery, her mother Tania Donald said.

The Donald family, of Mosgiel, spoke to the Otago Daily Times this week to highlight the physio pool trust's $1.5 million fundraising campaign.

Mrs Donald said the physio pool was the only facility in Dunedin able to cater for her daughter.

Courtney loved the freedom and movement afforded by the warm water, heated to 35degC.

She was assisted in the pool by her physiotherapist, Mark Shirley, a keen advocate for the benefits of the pool to Dunedin citizens.

Mr Shirley said the warmth of the water allowed muscles to relax and move easily, meaning more benefit was gained from the exercise.

''What happened in Courtney's case, with her really severe brain injury, is a whole lot of her muscles get really tight and they need to be moved.''

Courtney had also suffered multiple orthopaedic and internal injuries in the crash.

''We wouldn't have made the progress that we have, had we not had the pool.

''She's gone from being completely dependent for absolutely everything ... to being able to drive a power-chair by herself.''

Jim Duncan, of Dunedin, and Sami Heta, of Milton, another two of Mr Shirley's clients, also use the pool.

Mr Shirley said Mr Duncan (66), a paraplegic following a cycling crash in 2012, was an inspirational figure for other disabled swimmers.

''He's the first person with such a high level of spinal cord injury that I've managed to get freestyle swimming.

''The pool is really great for the guys with spinal cord injury.

''He can get in there and no-one knows he's got a spinal cord injury because he's actually a really good swimmer and he can keep up with the able-bodied people.''

Mr Duncan had encouraged fellow swimmer Miss Heta, a double amputee who was initially nervous about being seen in public without her prosthesis.

''Suddenly, Sami gets a little bit of inspiration and they start talking and sharing their story and I just completely back off.

''That's one of the magic things about that physio pool, is that people start to inspire and challenge each other.''

Swimming was great for leg amputees because it increased their heart rate without putting pressure on their bodies.

''I wanted to get her into the pool for such a long time,'' Mr Shirley said.

Miss Heta (43) said swimming helped her fitness and kept her weight down.

She had the amputations 18 months ago due to complications caused by a heart condition.

Mr Duncan said if Dunedin lost the pool, it would not get it back. He said the well appointed change-rooms were another important factor in helping the disabled enjoy their swims, and there was nothing like them at Moana Pool.

Launched a week ago, the fundraising appeal has raised more than $80,000.

This week, Cameron Charles Presland (21), of Milton, pleaded guilty in the High Court at Dunedin to the manslaughter of Danielle (17) and Shannon (22) Kiriau and two further charges of dangerous driving causing injury to his car's other occupants, Courtney Donald and Caitlin Adams on May 18.

He will be sentenced in June.