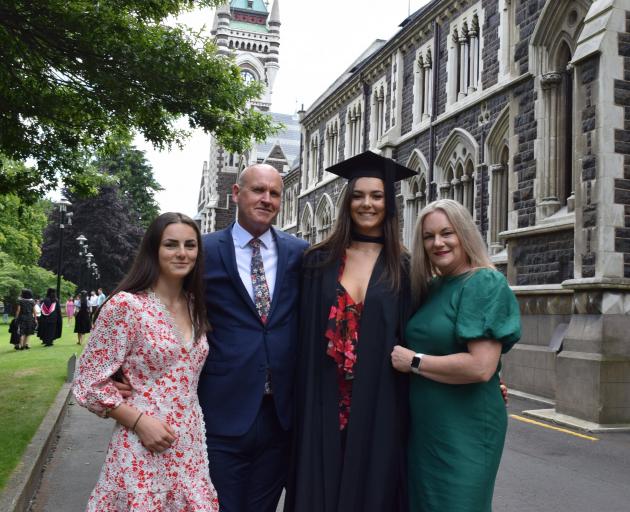 The graduation ceremony of University of Otago student Jeorgia Gesthuizen (third from left) was postponed in Dunedin this week due to a security threat, disappointing her and her family (from left) sister Saskia Gesthuizen, stepfather Greg Purcell and mother Natalie Jenkin. PHOTO: SHAWN MCAVINUE
Otago graduation ceremonies affecting hundreds of students have been called off this week after a security threat, and though disappointed, one student believes it was the right thing to do.

Two hours before the first of two graduation ceremonies was due to go ahead on Wednesday, the University of Otago called off the ceremonies and associated events due to a security threat.

Earlier this week the university received an electronic threat centred on the graduation ceremonies, set for 1pm and 4pm, and involving 533 students.

Graduands in full regalia were gathering at the Dental School ready to parade along George St when they were told the ceremonies were not going ahead.

University of Otago student Jeorgia Gesthuizen, of Tauranga, said she was walking with her family to the Dental School about 11am yesterday to be part of a procession.

Minutes before, she heard rumours graduation ceremonies had been postponed due to a terrorist threat but she had discounted it as a joke.

On the walk to the Dental School, she received an alert in eVision - the university’s student management system - stating her graduation was postponed.

The threat was "concerning" and she believed postponing the ceremony was the right decision.

Miss Gesthuizen was set to graduate after completing a bachelor of science degree.

She and her family had "dressed up" for the occasion.

Her stepfather Greg Purcell said he was unsure what to do after the sudden change of plans.

University of Otago vice-chancellor Professor Harlene Hayne said that the safety of everyone planning to attend the ceremonies and the wider Dunedin community was "at the heart of this difficult decision".

Police had "strongly recommended" the ceremonies were postponed and the university supported that recommendation, Prof Hayne said.

“We realise this will be incredibly distressing to everyone who was planning to take part in the ceremonies in person.

"For many, this was the replacement ceremony because of previous cancellations due to Covid-19. We share your disappointment.”

A total of 1600 students also could not graduate from Otago Polytechnic on Friday, 615 in-person in the two ceremonies, and 980 in absentia, while another university ceremony was postponed on Saturday.

Prof Hayne said the university would continue to work with the police and other authorities as they investigated the threat.

University of Otago student Sandy Jefferies, of Christchurch, said she was set to graduate with a masters degree in tourism in Dunedin on Wednesday.

"This is my third time trying to graduate this year."

The two earlier ceremonies were cancelled due to the Covid-19 pandemic.

The postponement had left her "shocked, gutted and devastated".