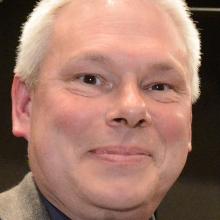 Ian Griffin.
Opponents of a plan to allow residential development on  land designated an outstanding natural landscape area on the Otago Peninsula have labelled the decision "terrible" and "a travesty".

The decision, released on Thursday, has prompted astronomer Ian Griffin to resign from his role as chairman of the Dunedin City Council’s dark skies advisory panel.

While opponents would not confirm it yesterday, it appears likely the decision will be appealed.

Landowner Steven Clearwater, of Peninsula Holdings Trust, applied for consent to subdivide his farm for four homes, three on the isthmus of land between Hoopers Inlet and Papanui Inlet and one nearby beside Papanui Inlet.

In his decision to approve consent, released on Thursday, commissioner Colin Weatherall said the amended application was expected to have fewer adverse effects on the environment.

Mr Weatherall also said he treated "with caution" some of the evidence received by submitters opposing the consent.

Dr Griffin, who said he was speaking as an individual, not in his role as director of Otago Museum, was until yesterday chairman of the council’s dark skies advisory panel.

Dr Griffin said he had sent his resignation to the panel yesterday.If the city could not protect the area, "that’s where I’m going to focus my efforts going forward".

Because a place he held dear was under threat, "the honourable thing to do" was to step down.

He described the decision as "terrible".

"This is a really important location for night sky viewing, and despite the commissioner’s findings, I continue to believe the development will have a detrimental effect."

Dr Griffin said he "may well take the matter further".

Asked if that meant he was considering appealing, he said he was "considering all options".

"The rationale for that is this is such a critical area for the future of dark sky Dunedin, it absolutely needs to be thought through."

The decision had the potential to destroy "the two best dark sky sites close to Dunedin."

The group was set up to oppose the project.

"I think the process is flawed," Mr Robinson said.

Scientific evidence regarding the effect of light on sky viewing at night had been "discredited" in the decision.

Mr Robinson said the process was governed by the Resource Management Act, the council district plan and second generation district plan, and the land was in a outstanding natural landscape area.

"The first time those are challenged, the commissioner completely disregards those and agrees to the applicant’s application.

"I think it is a travesty, and my opinion is that the process was flawed, and I think the commissioner has made a mistake."

"My question would be, why bother having a district plan?

"Why bother having a district plan if the first time someone comes up and asks you something about it you just roll over."

Council planners had said it should be declined, and had softened their view, but "softened it only".

"I just think it’s a waste of time, people who have honest attitudes to this going to all the trouble of putting in a reasoned and carefully detailed objection to find that it was discredited."

Mr Robinson would not comment on whether he planned to appeal the decision.

Save The Otago Peninsula’s Lala Frazer said the organisation was concerned at the precedent set by allowing four undersized rural building lots in an outstanding landscape area.

"In our view, this is not a true exception.

"The society considers it sets a precedent which will lead to further applications for a higher density of buildings than is desirable, making the attempt to retain an outstanding landscape area on the peninsula coast more difficult.

"It effectively creates a precedent that makes the district plan meaningless."