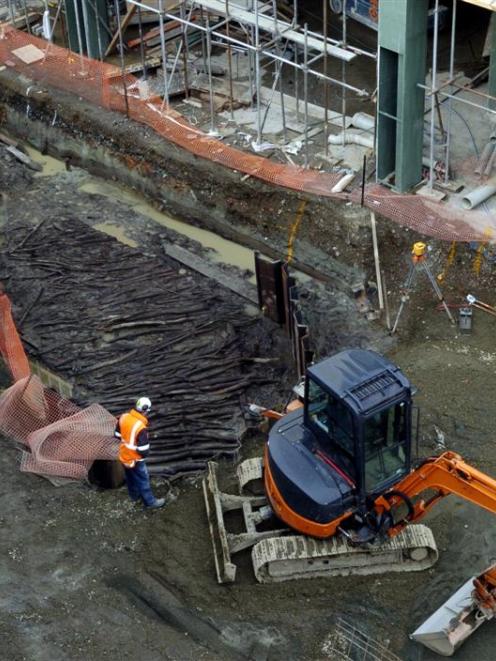 The historic causeway uncovered at the Wall Street development Photo by Gerard O'Brien.
The Historic Places Trust's insistence on prosecuting the Dunedin City Council over breaches to an archaeological authority for its Wall Street development has done little to promote partnership and co-operation between the two, city council counsel Garth Gallaway says.

In the Dunedin District Court yesterday, the city council was convicted and discharged on one charge of failing to comply with conditions imposed on an authority to destroy, damage or modify an archaeological site, under section 100 of the Historic Places Act 1993, after pleading guilty.

The second incident happened after the council had been made aware of the first breach.

The guilty plea was only entered after the council committed to preserve the nationally significant causeway uncovered during construction work, she said.

In summary, Mr Gallaway said the council did not intentionally breach the authority and the incident happened when the council's archaeologist was overseas.

Unbeknown to the council the contractor dug the trenches.

No damage was done and the council strongly denied the second breach two days later, he said.

The council had spent about $200,000 on archaeological requirements and compliance for the project and had committed to $350,000, plus ongoing maintenance costs, to preserve and protect the causeway.

It had hoped the way forward would have been for the trust to withdraw the prosecution "in good faith", he said.

Judge Paul Kellar said the council had breached five conditions of the authority and as a result of trenches being dug, a potentially significant archaeological site and removed material - including artefacts from the 1860s - had been damaged.

He agreed the council had tried to ameliorate the damages by resolving to approve the in situ preservation of the causeway.

Both parties reached a private agreement on costs.

Mayor Peter Chin said he was pleased the matter had been dealt with.

A meeting was planned where both sides could discuss the issues.

Historic Places Trust Otago-Southland area manager Owen Graham said the trust was pleased the importance of New Zealand's heritage and the need to comply with archaeological authorities was being recognised.

"Our preference has always been to work constructively with the Dunedin City Council on the city's heritage matters, and the recent discovery of the Wall Street timber causeway shows just how successful this approach can be."