Protesters get musical with demands to slash fares 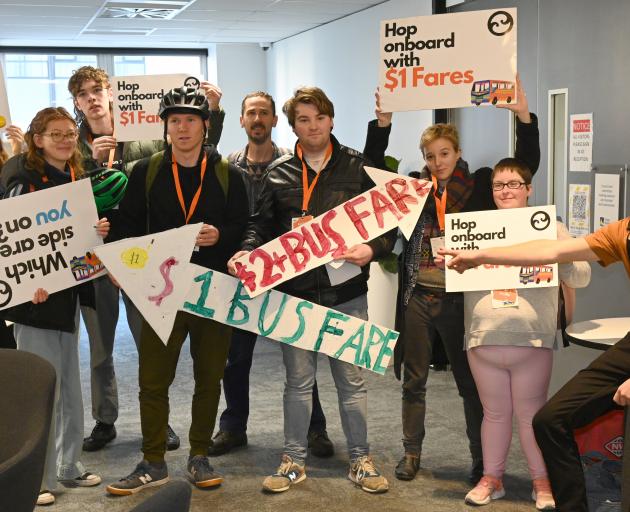 This time, members decided to get creative and somewhat musical in their request.

About 20 gathered outside the council chambers in Philip Laing House holding a large sign in the shape of an arrow saying "$1 bus fares" and another saying "$2 bus fares".

They asked councillors to choose which direction they wanted to take as they entered the meeting.

Only two regional councillors are on the joint committee.

The protesters then entered the meeting, with various instruments in hand, and began chanting a song that asked councillors "which side are you on?" and "does it weigh on you at all?"

Generation Zero’s Adam Currie said one of the easier wins for climate change was getting public transport
right.

"Our regional council is letting us down — we still having car-driven cities, we are not having good active public transport."

"It is better for everyone."

A very expensive non-win would be a more accurate way of describing this self-interested initiative.

A bus is not convenient, a trip to town takes about 7mins via a car, 15 mins by bus not including the 5min walk to the bus stop and the 10 min wait for the bus.

Depends where you standing. For me, it's the same time, except with a car, add the time to find a park and the walk to and frow to destination. It's very convenient not paying parking fees. The buses leaving the hub are on time, so no wait. Free Wifi on the bus so time to relax and catch up too.