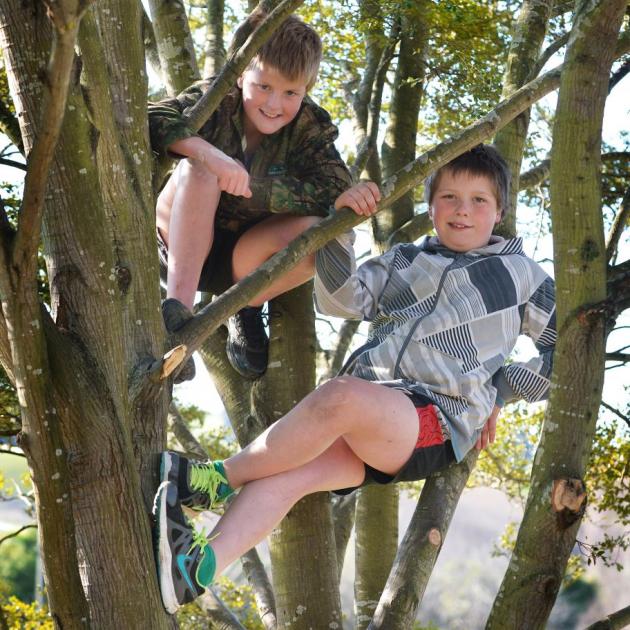 Waikouaiti School pupils Aaron Jones (left) and Tamati Sagar have used their maths skills to lobby for a change to the school rules. Photo by Gerard O'Brien.
Who said school rules can't be changed?

The Waikouaiti School board of trustees has thrown out one of its longstanding school rules after two of its pupils presented a convincing case to the board.

Tamati Sagar and Aaron Jones (both 10) love climbing trees, but the practice is banned for safety reasons.

The duo surveyed all the school's parents and found about 90% of them were in favour of allowing their children to climb trees during break times.

The boys prepared a pie chart on their findings and presented it to the board of trustees and school staff.

Board members were so impressed they relaxed the school rule three weeks ago, and children are now enjoying the freedom to climb trees in the playground.

They boys also surveyed parents to see if they could reintroduce tackle rugby to the playground, rather than the present Rippa-style rugby.

However, parents were not in favour of that idea.

Principal Trudy Pankhurst said the boys got a 95% response rate for their survey.

''That's the best response we've had from any survey at the school.''

She said the survey came about because she was teaching statistics to the year 6 class, and found Tamati and Aaron were streets ahead of the other pupils.

To keep them engaged, she encouraged them to undertake a project which involved a survey and graphing the results.

''The kids are connecting their maths and what they're doing, with real life. It's a great way to show that connectedness.

''I put that wee seed in their heads and they made it grow.

''It's inspired them. They're just thrilled. You see these two boys - their shoulders have just got a bit broader.''

Mrs Pankhurst said she was pleased the school rule had been changed because climbing enhanced skills such as co-ordination, balance and confidence, as well as developing strength and fitness.

Problem-solving skills also came into play when they had to work out how to get down again.

While the boys were not entirely sure what their next campaign would be, they said their ideas were only limited by their imagination.

Since the boys successfully lobbied the board of trustees, Mrs Pankhurst said there had been one tree-climbing accident at the school.

A pupil was airlifted to Dunedin Hospital last week with a fractured pelvis after falling from a tree.

''But the good thing is, the parents don't want us to stop climbing trees because of this accident.

''The mum said her son is fine, and that his doctors were pleased to hear children are climbing trees, and that we should continue to do it.

''Yes, there has been an accident, but kids are supposed to have accidents. That's how we learn from things.''

After the accident, the school, with input from the pupils, had introduced a rule that they could only climb about 2.5m up the trees, she said.

''We're learning and growing all the time.''