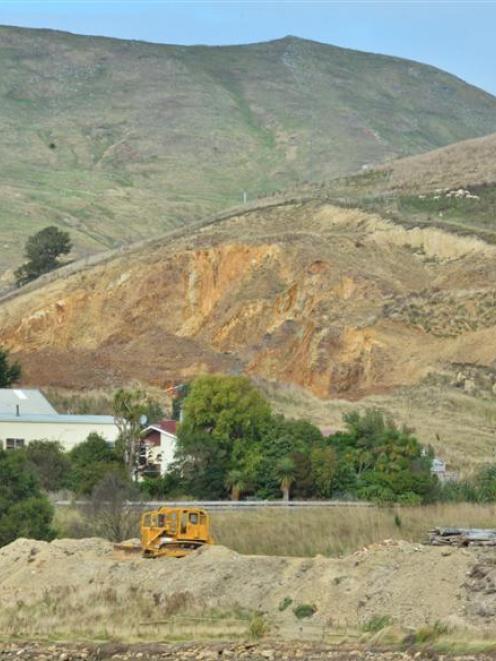 The Papanui Inlet quarry operation, headed by Peninsula resident Steve Clearwater, was found to be in breach of its existing consent following an inspection by council staff early last year.

The existing consent allowed rock to be extracted up to a boundary and a 45m contour line, but excavations had gone beyond that, prompting a complaint to the council from a member of the public.

As a result, Mr Clearwater - through the Peninsula Holdings Trust - had been asked to seek a new consent, with submissions under way and a public hearing to follow.

Mr Clearwater would not comment when contacted yesterday, but council resource consents manager Alan Worthington said the breach at the quarry was ''a concern''.

Mr Clearwater had been told to ''apply or comply'', by either operating within the limits of his existing consent or seeking an expanded one for the larger area now being quarried.

Complying with the existing consent would have required the area of the quarry's operation outside its existing boundary to be reinstated to its former condition, at the operator's expense.

Public submissions were open, and a hearings committee - yet to be appointed - could decide to stick with the original consent, he said.

''They [the operators] have sought permission to expand their quarry. The committee is either going to grant that, or they're not.

''If they didn't, they would have to tidy up what they've done to comply with their consent,'' Mr Worthington said.

The Save the Otago Peninsula group was understood to be among those preparing a submission, but spokeswoman Lala Frazer could not be contacted yesterday.

Otago Peninsula Community Board chairwoman Christine Garey also declined to comment until after a board member was selected to sit on the hearings committee.

The trust that owned the quarry has already submitted a fresh consent application with amended conditions, accompanied by a report by Hovell Environmental Planning.

The report said the quarry, at 194 Papanui Inlet Rd, had been operating intermittently for about 100 years, with a consent to expand its operation granted in 2007.

The report acknowledged excavation ''has been undertaken within some of the area outside the approved consent'', and could not ''in all practicality be reinstated back to pasture'', which meant a new consent was sought.

The report also pointed to the quarry's positive contribution to the community, supplying rock and gravel for the construction of roads, tracks and other building and infrastructure work.

The expanded area covered by the new consent would not result in an increase in heavy vehicle movements, and extra plantings would help screen and soften views of the quarry from the north, the report said.

Among other changes, a bund and plantings was also proposed to shield the quarry's only nearby neighbour from disruption from the operation, the report said.

Public submissions close on May 4, with a public hearing expected to follow.