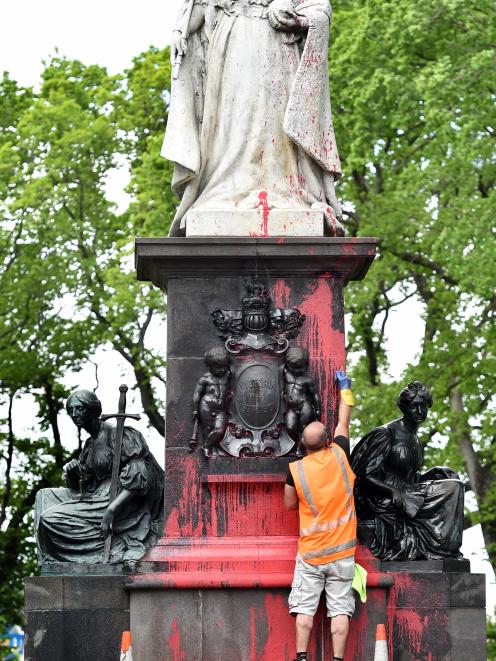 The memorial statue in Queens Gardens had a significant splash of red paint over it yesterday, and the words "Return stolen wealth Charles" and "Uphold Te Tiriti" (uphold the Treaty) were also spray-painted on the statue in red.

Otakou kaumatua and New Zealand Conservation Authority chairman Edward Ellison played a key role as a Treaty negotiator in Ngai Tahu's successful claim against the Crown for breaches of the Treaty of Waitangi, and said he was shocked and disappointed by the act.

"I think that's a very bad example of very bad graffiti on what is an important monument in the city.

"We certainly deplore that sort of action. There are proper ways to deal with these things - issues that people may have."

He could not say whether it was done by an individual or a group of activists, or what the motivation may have been.

"In my circles, it's completely outside of what we would be thinking or doing on these matters.

"Whoever has done this does not speak for local Kai Tahu." 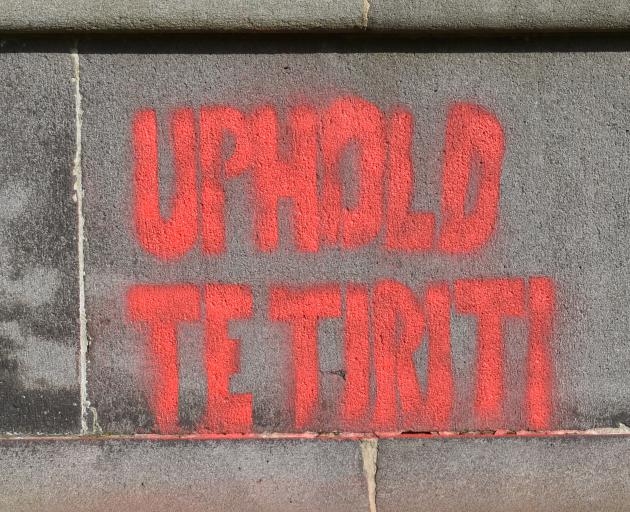 ‘‘Uphold Te Tiriti [the Treaty]’’ was painted on the statue.
Dunedin City Council parks and recreation group manager Robert West said the council had planned to restore the statue next month, but as a result of the graffiti, the restoration had been brought forward a few weeks.

"The combined cost of the clean-up and planned work is expected to be around $16,000.

"While everyone is entitled to freedom of speech, it's disappointing that someone would deface public property and leave ratepayers to cover the cost of cleaning up."

The incident had been reported to police.

It is not the first time the statue has been damaged by vandals.

In 2015, the tip of the tiara was knocked off when an orange road cone was placed on the head of the statue.

The statue was created by British sculptor Herbert Hampton and was unveiled in 1905.

It is the only one of its type in New Zealand to be carved from marble.

He was known as a successful creator of public memorials, having created six statues of Queen Victoria, one of Edward VII and one of King George.

His two New Zealand works are the Queen Victoria statue in Dunedin, and the statue of William Rolleston, in Christchurch.