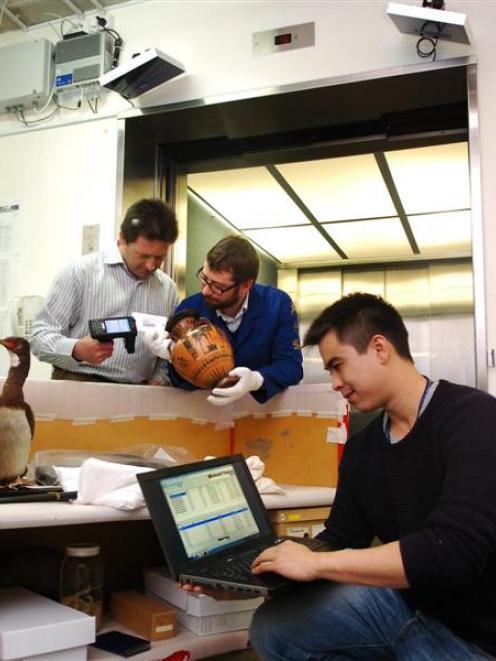 Radio transmitters and antennas (at top) can be seen on either side of this internal lift at the Otago Museum, while Smarttrack RFID business development manager Doug Rogan (pictured, left, with a portable electronic reader) tests a new radio tracking system, museum humanities collection co-ordinator Scott Reeves holds a 2500-year-old vase and the firm's project engineer, Shayne Pidding, checks data on a laptop computer. Photo by Jane Dawber.
The Otago Museum is the first major museum in New Zealand and Australia to begin installing a sophisticated new radio tracking system to monitor its artefacts.

Early this year, the Otago Museum Trust Board decided to buy the radio frequency identification (RFID) system from an Australian firm, Smarttrack RFID, at a heavily discounted price of about $A200,000 (then $267,000).

The proposal included 17 "portals", with readers, antennas, sensors and mounting brackets, as well as a hand-held reader and 100,000 RFID tags.

The firm's Canberra-based business development manager, Doug Rogan, was at the museum last week when museum staff tested the new system, trying out the electronic tags in a variety of settings, including when placed close to ancient metal coins, attached to stuffed birds, and to a 2500-year-old vase.

Mr Rogan said RFID technology had long been established in other settings, including supermarkets and warehouses.

He believed the Otago Museum was the first major museum and the first large-scale cultural organisation in the world to begin using this particular system, which has been adapted for use by museums and art galleries.

Museum collections and research director Clare Wilson said the system was a "major milestone" for the museum, and this way of automatically tracking collection items as they were moved would significantly improve efficiency and security.

The installation had progressed "very positively", with training and testing still going on, Ms Wilson said.

Some collection management tasks which could previously have taken months would be accomplished in "minutes" when the new system was operating.

Adding RFID tags to artefacts would be combined with a "thorough audit" of the museum's full collection in coming years, helping improve collection management and care.

The combined initiatives would place the museum at the "forefront of museum best practice" and greatly enhance the accessibility of the collection both for use by museum staff and other people, she said.

Electronic tags will be added to thousands of museum artefacts from next February to June in a pilot exercise for the combined approach.

The museum's two million artefacts will be progressively equipped with electronic tags, enabling them to be tracked automatically when they are shifted within the museum, using fixed "readers" installed throughout the institution.