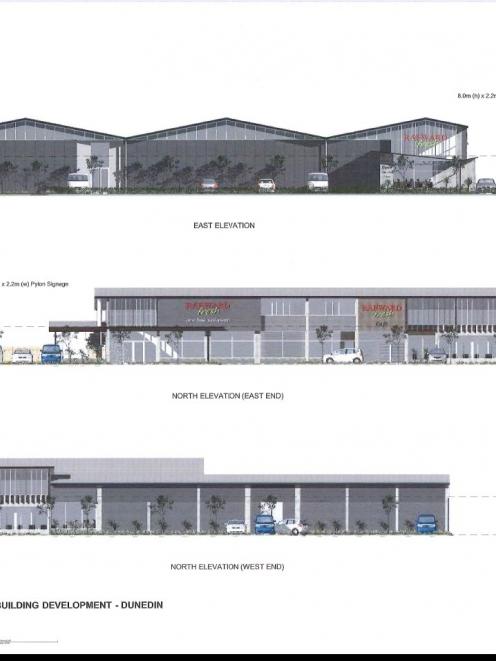 An artist’s impression of the proposed Raeward Fresh supermarket planned for the Midland St site. Image supplied. Click to enlarge
A decision on a proposed fresh food supermarket and cafe in South Dunedin's industrial area will be known within weeks.

The Dunedin City Council has received further information on Foodstuffs' planned Raeward Fresh store and cafe and will deliberate on the resource consent this week.

Hearings committee chairman Cr Andrew Noone said the committee had been on a site visit and would deliberate on consent for the project tomorrow.

If approved, the store and cafe would be built within Foodstuffs' site on the corner of Midland and Otaki Sts, which was being used for overflow from the grocery giant's nearby distribution centre.

The store's proposed 1108sq m retail space would include an ‘‘open feel'' market area with ‘‘an emphasis on non-processed foods'', a report from council planner Darryl Sycamore to the hearings committee said.

A butchery area, liquor area and chillers for dairy and produce would be included and a 203sq m cafe would link to the market but have its own entry and outdoor seating.

Five Raeward Fresh stores operate across the South Island - three in Christchurch and one each in Queenstown and Nelson - and are owned by the company, which also owns the Pak'n Save and New World brands.

Mr Noone said a decision would come within weeks of the hearings committee's deliberations.

‘‘There'll be a decision by early April, if not sooner.''

It follows confirmation on Monday the council and Foodstuffs' rival, Progressive Enterprises, had reached an agreement on a proposed supermarket in Mosgiel. That project, which council planners recommended the council decline, could be completed within 12 months.

A Foodstuffs spokeswoman said the company had provided further information to the hearings committee, as requested, but did not wish to comment.

‘‘We are still awaiting the outcome of the hearing following provision of this information so are unable to comment further,'' she said.

A copy of Foodstuffs' right of reply provided to the Otago Daily Times showed the store had argued the proposal was different from any other supermarket in the city and its sustainability relied on it being adjacent to Foodstuffs' distribution centre.

‘‘Raeward Fresh is not a supermarket, or a smaller-scale convenience grocery store, and so can be distinguished from other general retailers of food and grocery products,'' the submission said.

‘‘At least 80% of retail floor space within the Raeward Fresh will be dedicated to the sale of fresh produce.''

The company's proposed store and cafe was a ‘‘true exception'' to any resource consent application the council might receive in the future, it said.

‘‘The combination of activities on the site (the Raeward Fresh market and cafe, storage and warehousing operations) and the adjacent distribution centre promotes the efficient use of natural and physical resources that cannot be replicated on other sites or by other food and beverages retailers.''

Mr Sycamore's report said the proposal should be declined because it would ‘‘undermine the integrity of the district plan'' and ‘‘set an undesirable precedent''.