Conditions have eased after a day which brought widespread heavy rain and flooding to much of the South.

In a statement this evening the Dunedin City Council said surface flooding was still widespread, but waters were receding and the forecast was for "a low level of rain" overnight.

Rain has eased in Dunedin. We'll keep an eye on things overnight. However, if you have any urgent issues, please call us on 03 477 4000.We won’t be monitoring our social media overnight unless the situation deteriorates significantly, but we will back again from 8.30am tomorrow.— Dunedin Emergency (@DnEmergency) November 20, 2018

The rain brought major disruptions, closing dozens of roads, including several southern highways, some of which will remain closed overnight.

Some residents in Henley on the Taieri were advised to evacuate as river levels reached flood levels, and the DCC said surface flooding still affected much of the Taieri Plain this evening.

The council's Emergency Operations Centre was to close but staff and contractors would keep an eye on things overnight in case the situation changed. They were ready to respond as needed. 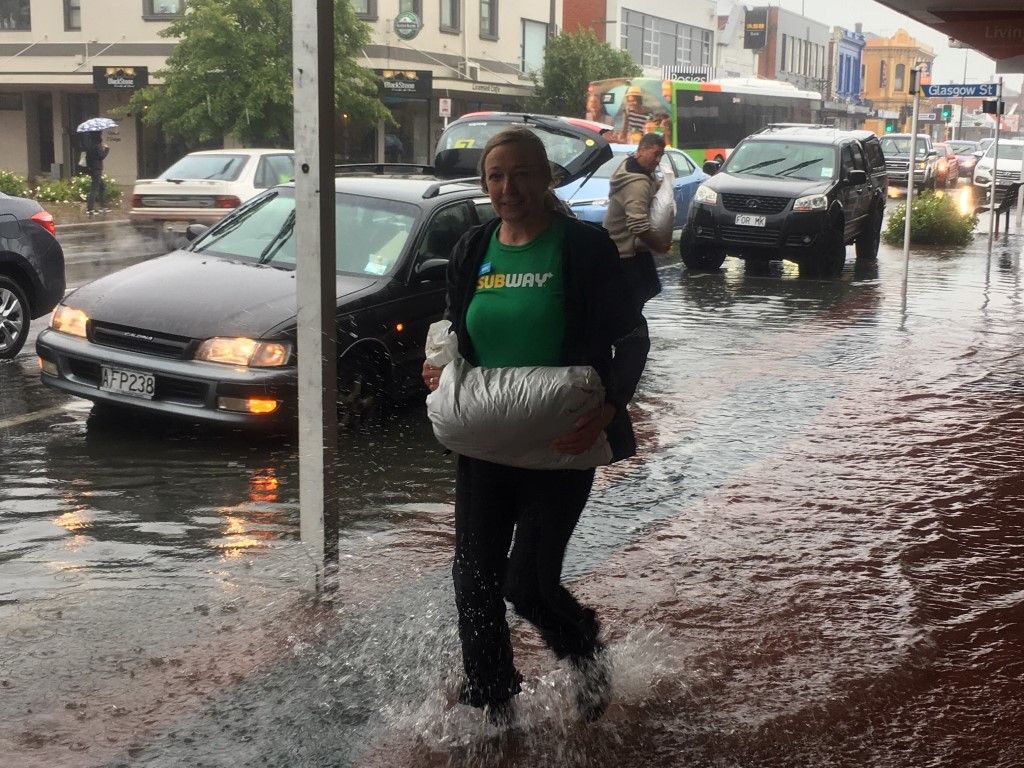 People were urged to stay off roads overnight, because of the flooding. The council said not all surface flooding was signposted, so anyone on the roads should drive slowly and treat all roads as though they could be flooded.

People should stay out of floodwaters and treat them as contaminated.

A number of local roads remain closed and State Highway 88 and Aramoana Road are open to one lane. There is also a number of slips around the city.

Extensive flooding and wastewater surcharges affected Middlemarch today and residents are advised not to drink water from private bores as it is likely to be contaminated. Water will be available from a tanker beside the Strath-Taieri Community Centre from around 10pm.

Wastewater surcharges also affected some roads and properties in the city this afternoon. Heavy rain infiltrating the wastewater system forced up manhole covers in areas including Surrey St, North Rd, Kaikorai Valley Rd and Carlyle Rd in Mosgiel. All available bypasses were opened to alleviate pressure on the system and the surcharges have now stopped.

There was a wastewater overflow to the Silverstream in Mosgiel and minor overflows to other waterways, including Otago Harbour.

The council advised people to stay out of waterways and not to collect shellfish for 48 hours.

Anyone who needs assistance with emergency accommodation can contact the DCC on 03 477 4000.

Any urgent issues can be reported via 03 477 4000, which will be staffed throughout the night.