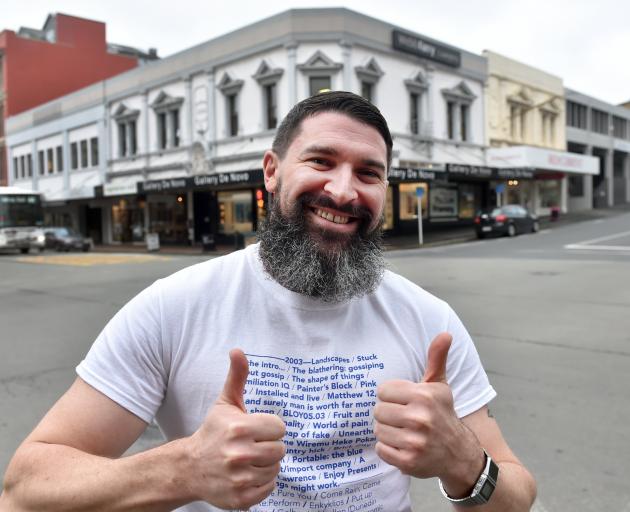 Woof! bar co-director Dudley Benson has asked the Dunedin City Council to install a rainbow crossing at the intersection of Moray Pl and Lower Stuart St. PHOTO: PETER MCINTOSH
Dunedin has been challenged to nail its colours to the mast as a member of the local queer community called for a rainbow crossing in the city centre.

Rainbow crossings, which are zebra crossings painted in colourful stripes, have been installed in other cities in New Zealand and globally as symbols of support for the rainbow community.

Mr Benson had a larger vision and said Dunedin could have a unique and the biggest rainbow crossing in the country.

He suggested a rainbow design be painted on the entire Barnes Dance crossing at the intersection of Lower Stuart St and Moray Pl, which is where Woof! bar is located.

A public symbol of support was of particular importance to youth in the city.

"Young people in Aotearoa are far more likely to suffer from mental health issues and the threat of suicide if they’re queer, or if they are trans people."

A crossing would be a small but significant way to show support for a vulnerable segment of the community and take a stand against homophobia and transphobia, he said.

Cr Steve Walker commended Mr Benson on his proposal and asked whether a crossing would have an impact on tourism.

Mr Benson said that in his personal travels he had preferred to spend time in places with outward symbols of safety and acceptance.

"There is no doubt in my mind that by having this incredible talking point ... we will be bringing more visitors to Dunedin."

Cr Lee Vandervis asked if the project was intended as art or as a political statement.

Mr Benson said that the crossing was not intended to be seen as political, but as a symbol of love.

"It’s a symbol of what we stand for, what we tolerate, and it’s an identity symbol of who we are."

At the conclusion of the meeting councillors voted for staff to discuss the proposal with Mr Benson and other stakeholders and report back to them at a future meeting.

Speaking after the meeting, Mr Benson said it was important that there was consultation with the various communities under the rainbow umbrella to ensure the crossing is representative of the whole community.

A petition in support of the proposal is available to sign in Woof! bar.

Seriously? What rational justification is there to introduce more coloured paint to our central streets? This is a street with a function need for safety and clarity to road users, not a mardi gras event.

Perhaps if a rainbow crossing confuses you, you shouldn't be driving. The rational justification is the visibilfor a marginalized community, as the article states.

It's about love? It's political!

It's showing support to an oppressed and discriminated minority. Grow up.

I'm sure our PC mayor will oblige. He loves spending ratepayers money on vanity projects like painting roads. As for those funding such a waste - what do they have to do with it?

I'd much rather support this than the last painted debacle on our towns streets.

What a great idea! I love the simplicity of this way of showing our city supports the rainbow community, especially when the positive wellbeing effects similar projects have had around the world on some of our marginalised people are apparent. And bonus points for bringing a little visual art into our public infrastructure.

Ignore these old dinosaurs, its great idea, go for it.

Great idea! Would really brighten up that corner, and show our support for lgbtqia+ in our community!

Markings on the road used to be intended as safety measures not as political or celebratory statements. Mr Benson (part)owns quite a prominent building; so what stops him from adorning said building with a rainbow?

So Mr Benson is sure it will bring more visitors to Dn to see this talking point and of course that would benefit his establishmment. No thanks.

I'm wondering if this is less about "bringing visitors to Dunedin" and more out of self interest, Are we quite sure Mr Dudley Benson is not proposing a red carpet straight into the doors of his own establishment? in other words, is this an opportunity for Mr Benson and co owners’ of Woof bar to gain rate payer funded free advertising, directing punters into his Queer friendly establishment, by way of a rainbow flag zebra crossing, positioned rather conveniently outside his existing proudly gay owned business? Not all gay people require the visual affirmations of queer symbolism to feel part of the community. Somehow this reeks of an opportunistic endeavor.

Great idea! Such a easy way to make people feel welcome and safe. Will be in to sign the petition this weekend!