Rare bird left out in the cold

By Vaughan Elder
0 Comments
It's a lonely life being a white sparrow.

An uncommon leucistic sparrow has made his home in Dunedin's Chingford Park, but seems to be shunned by the other sparrows.

Leucism results in the loss of pigmentation and means he is largely white and has a yellow beak and feet rather than the usual dark colour.

Seen over a week at Chingford Park, he usually sits close to, but separate from, groups of other house sparrows.

Ornithologist Derek Onley said it was possible the bird, while thinking of itself as a sparrow, was not seen as one by other members of its species. 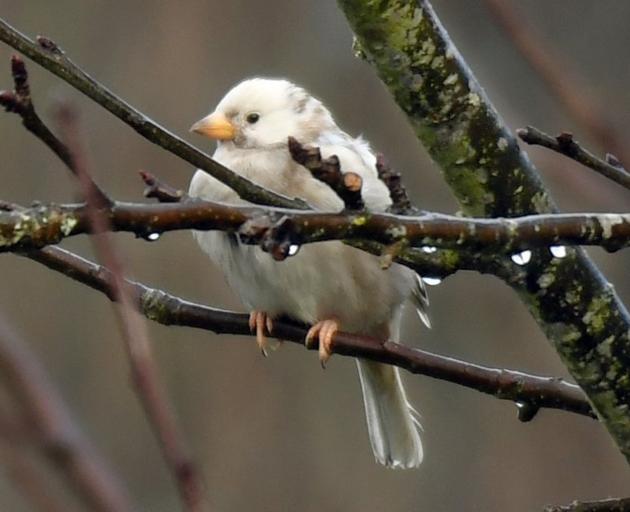 This white sparrow has made himself a home in Dunedin’s Chingford Park. PHOTO: STEPHEN JAQUIERY
This was because he did not have the usual markings sparrows used to identify one of their own.

Based on its faded markings, he believed the sparrow was a male.

Mr Onley said that while uncommon, leucistic birds had better chances of survival in New Zealand than elsewhere because of the lack of predators, such as sparrowhawks, that picked on birds that stood out.

He believed there were probably only one or two leucistic sparrows in Dunedin at any one time.

While seldom seen, leucistic sparrows were not as rare as leucistic fantails or silvereyes, which also occasionally showed up.

Mr Onley said people used to shoot and collect leucistic specimens in Victorian times, and during his involvement in shifting stuffed birds to Te Papa he saw pale and unusual-coloured kaka and parakeets.

Even rarer than leucistic birds are albino birds, which are completely white and have pink eyes, beaks and feet.