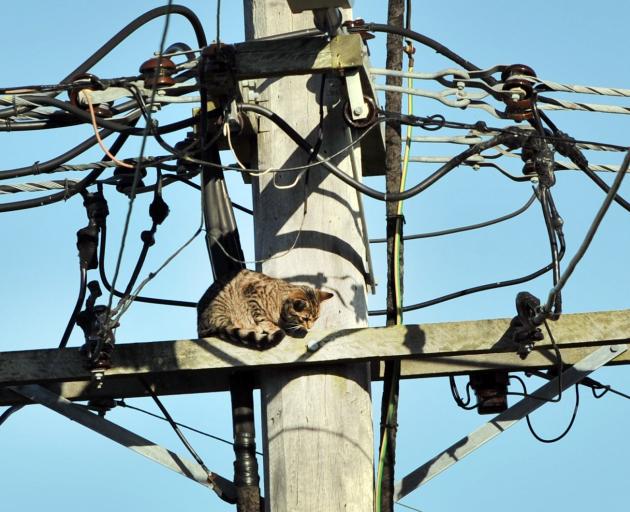 Ratbag the cat considers the consequences of her actions after climbing up a power pole in Allenby Ave, Dunedin yesterday. PHOTOS: CHRISTINE O'CONNOR
It can be tempting to call your pet a ratbag when they misbehave, but one Dunedin woman found herself yelling the name on the side of the road yesterday.

That is because the family cat, named Ratbag, got stuck up a power pole.

Tara Knight said she came home from a shopping trip to hear Ratbag calling out from the pole in Allenby Ave.

At first she tried calling for the cat, but did not want Ratbag to try to jump down.

She considered climbing the pole, but decided it was far too tall, so she called emergency services instead.

Emergency services and Delta arrived and retrieved Ratbag from the pole.

Once down from the pole, Ratbag climbed up on to Ms Knight’s bed and did not leave, she said.

The incident was another example of the cat being "a wee rat". 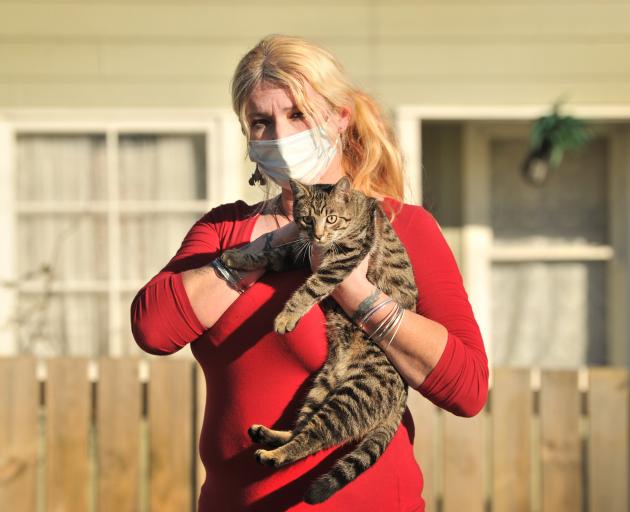 Owner Tara Knight holds Ratbag after she was rescued by emergency services.
The name was given endearingly, as Ratbag was a "real mischievous little kitten".

"She’s just a bundle of trouble."

She was relieved the 3-month-old cat had been rescued and had not been injured.

Ms Knight had planned to put the cat inside while she left the house, but could not find her before she left.

Ratbag was a jumpy cat and all it would take was a dog walking past to spook her into running up a pole or a tree, Ms Knight said.

Ms Knight had to head back into town again afterwards and would be returning with a cat harness and a bag of treats, she said.

The next project was to build a patio for the cat so she could enjoy the outdoors safely.