Recycling bins to be checked for rubbish 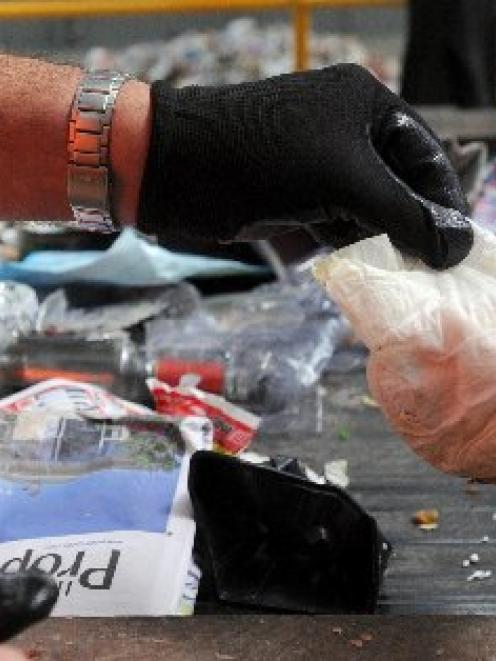 A soiled nappy found in recycling. Photo by Craig Baxter.
The Dunedin City Council is planning more door-to-door checks aimed at lifting the lid on the contents of the city's wheelie bins, as part of a crackdown on recycling contamination.

He also warned the council would need to consider raising the $63-per-household cost of the scheme, paid through rates bills, if contamination levels continued to soar.

The $63 cost was based in part on an expected contamination level of 5%, he said.

However, it was confirmed last week a steady stream of used nappies, needles and other non-recyclable items - even including a pig's head - had driven contamination levels up to about 12%.

"It's much higher than we had initially anticipated," Mr Featherston said.

"If the contamination rates keep staying up this high, we'll have to be putting up the cost of the service.

"We can't expect the contractors and the service to be suffering through people just using it for rubbish."

His comments came after the ODT last week reported workers at the Green Island recycling plant were weeding out high volumes of non-recyclables discarded in the ratepayer-funded wheelie bins.

One worker was also awaiting blood test results, after being stabbed by one of many needles and syringes arriving with the city's recycling.

Mr Featherston yesterday described the behaviour of some residents misusing the wheelie bins as "amazing".

"It's just laziness by some residents, and it's just contaminating and mucking up the system."

Plans for extra wheelie bin inspections were being discussed with contractors, and would likely result in more warning cards being issued and wheelie bins confiscated, he confirmed.

"We're going to be looking at more of the bins ... so that we get the contamination levels down and have the right materials in the bins."

He would not say when the checks were likely to begin, for fear of tipping off offenders.

Other New Zealand centres operating similar collectionsystems had contamination levels around 5%, and Dunedin's higher level could be put down in part to people "trying to test the system", Mr Featherston believed.

Staff at the Green Island plant were being "more stringent", meaning a cleaner stream of recyclables available for sale at the end of the process, but also higher volumes of contamination collected.

The appearance of needles and syringes was an industry-wide problem, but contractors in Dunedin were discussing ways of better protecting their staff, he said.

"If people just took the conscientious step of only recycling what we've got [listed on wheelie bins], and putting the rest in rubbish bags, we'd be OK."