In remembrance of an Otago Peninsula son 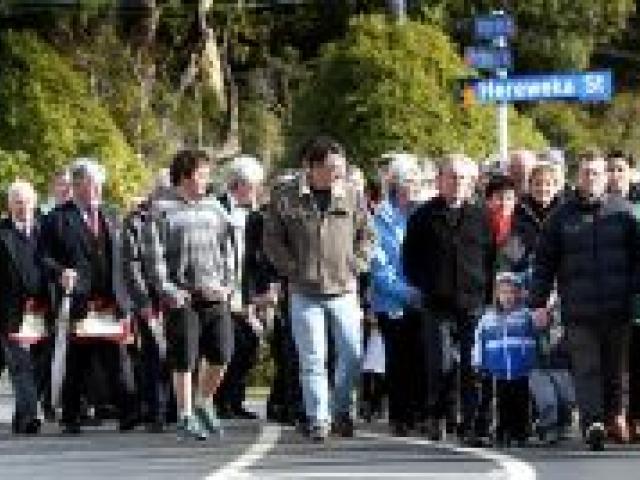 Family members, friends and Masonic Lodge members walk towards the Otago Peninsula Museum and Historical Society buildings on Saturday to honour peninsula resident John Geary, who died at Chunuk Bair, Gallipoli, during World War 1. Photo by Peter McIntosh.
A memorial march and plaque unveiling at Portobello on Saturday both honoured Lance corporal John Geary, who died on the corresponding date, August 8, at Gallipoli 100 years ago.

The ceremonies were part of the commemorations of the World War 1 battle of Chunuk Bair, where more than 140 Otago soldiers died.

More than 80 people marched from the Portobello Bowling Club, in Sherwood St, to the Otago Peninsula Museum and Historical Society building in Harington Point Rd on Saturday afternoon.

During the later unveiling ceremony, the Last Post was played by a bugler, Portobello volunteer firefighter Kelven Gaskill.

Lcpl Geary, was a member of the Otago Mounted Rifles and the Maori Contingent, was the son of William and Mary Geary, of Portobello. 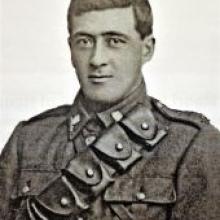 John Geary. Photo supplied
He was a junior deacon at the Peninsula Kilwinning Lodge 696, and members of that Portobello Masonic Lodge organised Saturday's events, attended them and spoke at them.

On behalf of the Geary family, Orma Blackler, of Portobello, unveiled the plaque, which is on an Anzac memorial stone in the museum's grounds.

Geary family members laid a wreath, lodge members lay sprigs of acacia by the plaque, and the Masonic Choir and members of the public sang The Maori Battalion.

She later said the commemorative events had gone very well and recent associated research about John Geary had increased awareness within the Geary family about his life.