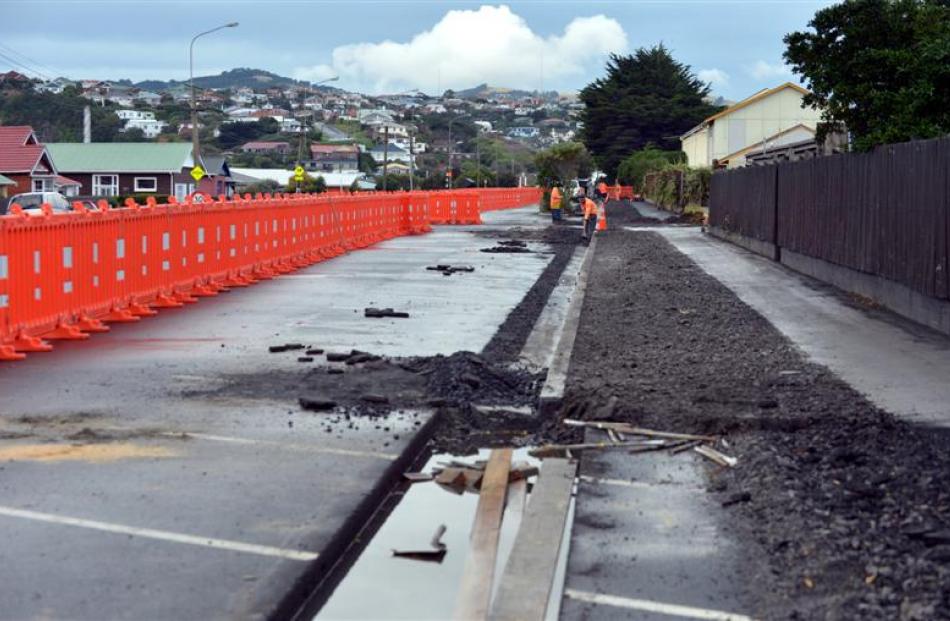 Contractors work on widening the footpath to create a shared path on Tahuna Rd. Photos by Peter McIntosh. 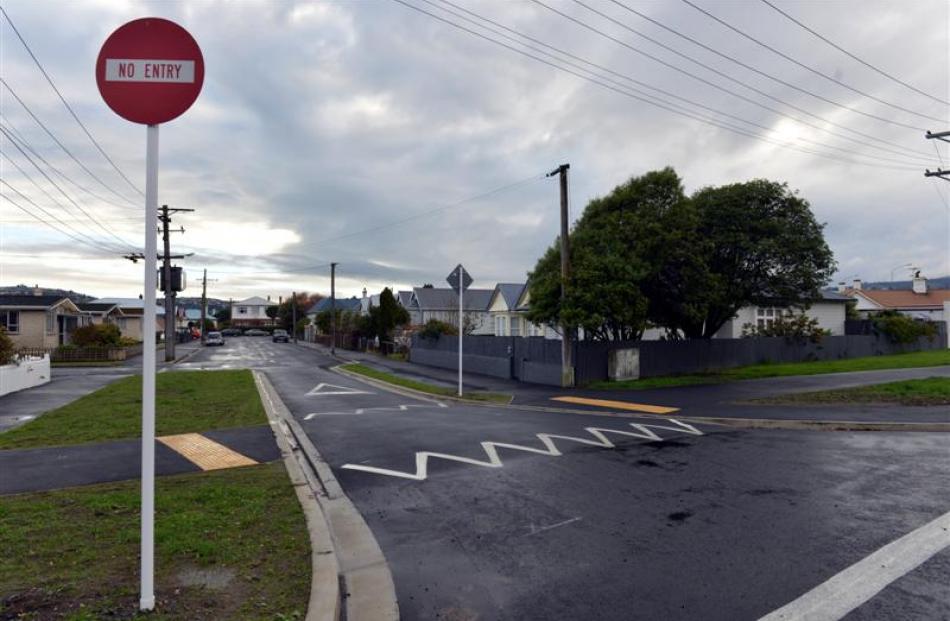 The new cycle lane in Royal Cres crosses Rugby St, a former two-way street that has been turned one way at the Royal Cres end to reduce traffic over the lane. 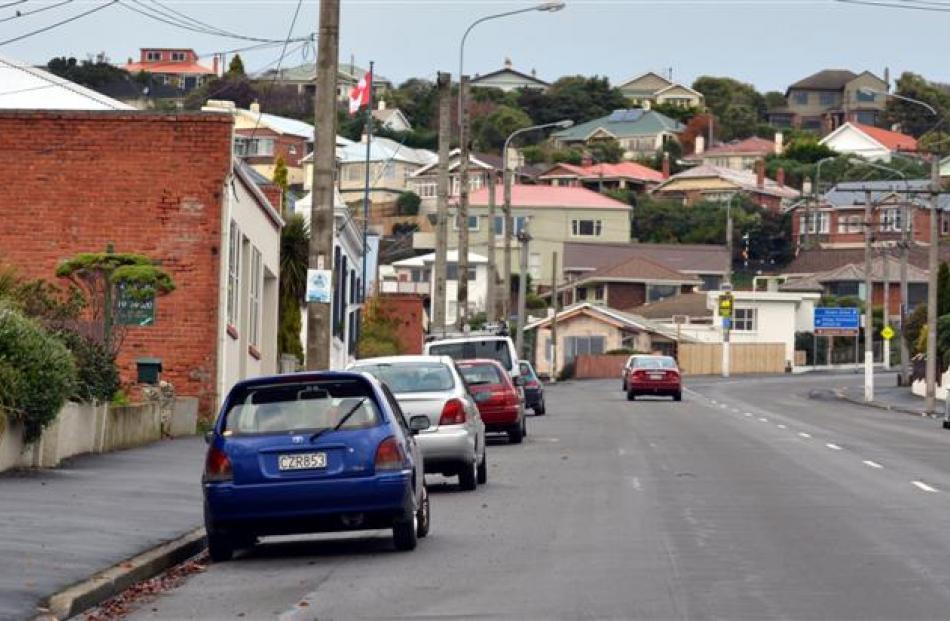 A shared path will be installed on the uphill section of Silverton St. 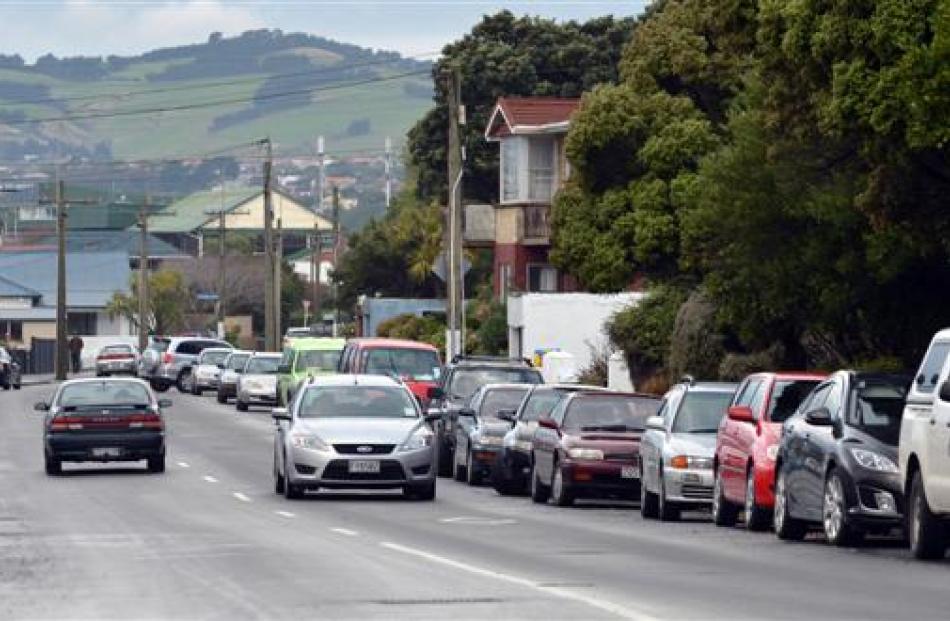 The council is proposing removing parking on the seaward side of Victoria Rd (at the right in picture) to widen the footpath into a shared path.

If, as one city councillor said this week, any decision involving road changes will upset some people, then inserting a large network of new cycleways on top of existing streets must be up there as a challenge for a city.

But, Debbie Porteous asks, should the plans for streets such as Victoria Rd in St Clair have come as such a surprise to those living there? Has the consultation process been as good as it can be?

After years of hearing from cyclists demanding improved cycleways, the Dunedin City Council in 2011 approved a ''strategic cycle network'' for the city.

Now the network is being built, the council is hearing from a different group of people - those affected by the work being done.

The concerns of residents who live where cycleways are scheduled can be summed up by those in Victoria Rd, whose voices have been heard loudly this week and last.

The concerns primarily centre on safety, particularly that people in cars will hit cyclists while crossing the lanes to access and exit homes and businesses.

The other common concern is about the level and process of consultation.

Victoria Rd is just one of many in South Dunedin that are about to have significant changes made to them to accommodate new cycleways.

There, the council is proposing removing 38 parks in a spot where there is already a daily parking tussle between residents and people wanting to visit the nearby beach, playground, cafes and shops.

More businesses and apartments are also planned for the area.

People there appeared to get a shock when they received a letter from the council last week outlining the proposal.

But did it really come out of the blue?

Plans to put cycleway routes, including along the length of Victoria Rd, were first signalled in 2011.

After further refining the plan for the South Dunedin part of the network, which then showed the route in St Clair travelling over the sand dunes, there was city-wide consultation in 2013.

More than 160 submissions were made during the eight-week consultation period.

Affected parties on the cycleway routes in the first of four route ''packages'' for South Dunedin were consulted at the same time via a letter drop, seeking feedback over the next two weeks, drop-in sessions and subsequent meetings with individuals and groups.

Staff described the latter work as a ''lengthy, intensive and collaborative consultation'' in a subsequent report to councillors, which outlined the submissions received, issues identified, staff responses to concerns, and sought councillor approval for resulting recommended changes to routes.

Similar ''affected party consultation'' has been completed on the second and third route packages, which involve cycleways on Richardson St, Musselburgh Rise and Silverton St among others, and a report is being prepared for councillors to consider on June 3.

At that point, councillors will be asked to sign off the various changes recommended for routes.

The results of the current consultation on the fourth route package - involving a change back to a cycleway on Victoria Rd - will be reported to councillors for decisions in due course.

Council manager of transportation planning Sarah Connolly said the fact the route had changed from the dune pathway outlined previously was not too surprising given detailed plans could only be made for each route when staff progressed through the plan.

She said the way the council had chosen to consult was felt to be most appropriate after considering the level of impact of the proposal - including how many people were likely to be directly or indirectly affected - and given the time staff had to deliver the project.

In this case, that was essentially within three years.

Within that time constraint, there were also funding and staff resourcing considerations, which ruled out broader or longer consultation on each part of the network as it developed.

''Having said that, if other people are interested or feel they will be impacted, they can also make a submission which will be considered. Responses from people who are not directly affected will still be considered.''

It was always a difficult task making roading changes, and it was impossible to keep everyone happy, she said.

The fact you cannot please all of the people all of the time was also noted by Wellington city councillors last week as they gave the go-ahead for a multimillion-dollar Island Bay cycleway revamp, despite impassioned pleas from Island Bay residents, who presented a 447-signature petition complaining about the consultation process and asking for work to be halted because of concerns similar to those of South Dunedin residents.

Cr Iona Pannett was reported in The Dominion Post as saying consultation should not continue endlessly, and hard decisions had to be made.

''At some point, we have to vote for something. I want to get on with it, now.''

However, the council's engagement with residents had to be improved, and the method of just one pamphlet in each letterbox was not adequate to keep people informed and consulted, she said.

Ms Connolly believed the DCC was certainly more engaged than that.

Staff had spent many hours doing letter drops to hundreds of households, talking to hundreds of people, answering questions, providing feedback, taking comments and reporting back to the council.

So, back to Victoria Rd.

Some local residents appear to prefer the dune route, but that seems unlikely to go ahead, given council staff's already stated reasons, the estimated $13 million cost of a buried backstop wall needed to shore up the dunes - that work is not programmed to start for about another 10 years - and the council's commitment not to start any capital expenditure projects.

That leaves the shared path as a serious option.

Some say a proposal to remove 38 car parks should be something the council consults more widely on and for longer.

Asked about that, Ms Connolly said broader consultation was important when a change affected more people more widely, although it was not always easy to assess whether that was the case. In this case, staff did not consider this a significant change as it was primarily those who lived or worked in the area who would be affected.