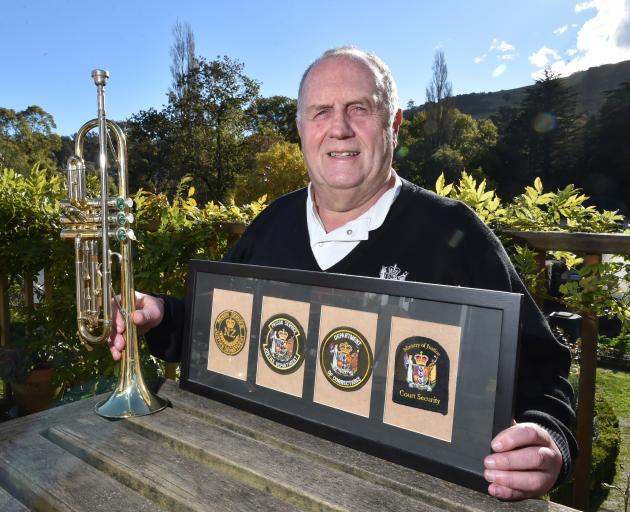 First was Mr Oswald’s grandfather, Joe Oswald, who arrived in New Zealand from County Durham in the 1920s. He joined the police and, from 1929, was a familiar figure around Dunedin, featuring in a much-published photograph while on traffic duty in the Exchange during the "Big Snow" of 1939.

A son, also named Joe, became a court bailiff in Dunedin and a son-in-law, Constable Vince Donnelly, was a court orderly. The justice connection continued to a third generation when Geoff Oswald joined the prison service in 1985. Job security, rather than tradition, attracted him, he says, as he and his wife Vivien had three young daughters to feed.

Mr Oswald worked at the Dunedin prison for 22 years until "the prison left me". He decided, mainly because of the travel involved, not to transfer to the Otago Corrections Facility at Milburn.

That was in 2007, but 2008 found him at the courthouse, having been recruited by former police sergeant and dog handler Wayne Olsen to the court security team. He remained there for 10 years and  officially retired in February.

He "thoroughly enjoyed" the security work and he had warm memories of his 22 years at Dunedin Prison. Despite its daunting and old-fashioned appearance, it was "a very humane place, very family-oriented", Mr Oswald says.

Of his dealings with inmates over the years he says: "It’s been an honour to be part of their lives. You see them at their best and their worst, get to know them, to meet their families, wives, partners, parents, grandparents and their children.

"And you see them outside when they have jobs and have turned their lives around."

The prison building itself was "very Victorian, very cold — and haunted".

One night he was  walking up the stairs from the basement when "all of a sudden, it got very cold".

"I kept walking, didn’t look behind me. But the hairs on the back of my neck were standing up."

When he asked colleagues if they had ever felt anything strange or unusual, the unanimous response was "yes, in the basement". Over the years, various inmates also talked of seeing and hearing strange things. He recalled being called back to work about 7pm on September 22, 1998. A riot had broken out and some inmates had lit a fire in the basement. It took until 3am to "sort things out". Then it was forgotten. It was "cup-of-tea time".

"Prison was was not all punitive. We had a lot of fun," Mr Oswald said.

As a Lifestyle Changes tutor, he helped prisoners  alter their mindset, taking them for runs in the Silverpeaks and walking the Routeburn Track. But there were also low times.

"The worst were cutting people down — when they’d tried to hang themselves. And it’s not nice seeing people cutting their arms open or having to clean up the blood after some violent incident".

One of the real difficulties was adjusting to life at home, being with his family and ordinary people.

"Because the prison was a family, although a different kind of family."

He credits his wife with keeping him grounded in normality.

Retirement means more time for the sports massage business he established in 1994 and for manufacturing his own natural ingredients massage wax.

As a tuba player and collector of brass instruments, he will be working on mastering the French horn, the trumpet and the flugelhorn. And the 65-year-old wants to find a canine companion to take on walks around Northeast Valley, his previous dog, a "lovely" 12-year-old chocolate labrador, having recently died.