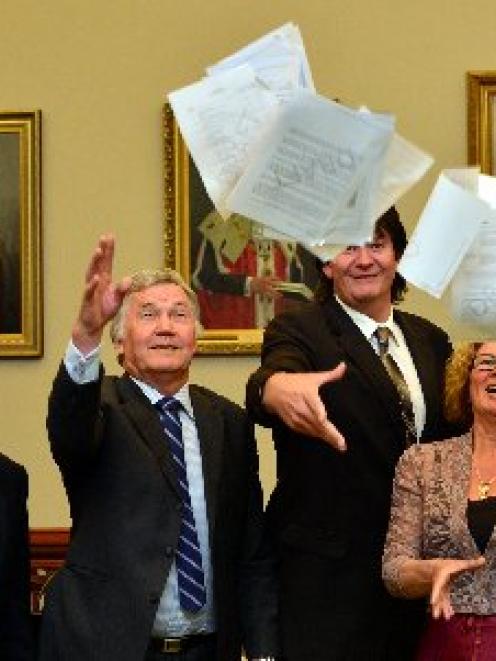 Crs John Bezett, Paul Hudson and Collins said they were disappointed to hear Cr Acklin had resigned after nine years' service, and hoped he would one day decide to come back.

Many might not understand just how much of a contribution Cr Acklin had made, especially on issues such as John Wilson Ocean Dr, Cr Hudson said.

Cr Acklin said his tenure had been a ''huge roller coaster'' of good and not so good, but he was focusing on the positive.

He was proud of his work in areas such as Logan Park, theatres, Middle Beach and playgrounds, but said his biggest challenge had been John Wilson Ocean Dr.

''I like to think of it as not open, even though it is open on weekdays ... Hopefully, the next council will make it better.''

Councillors said Cr Brown was a fair-minded and trusted member, a consistently hard worker who made a ''very substantial'' contribution, especially on financial issues and as a strong advocate for Mosgiel, in his 15 years on council.

''He is a wise old owl. When he speaks, I listen and know we all do,'' Cr Collins said.

Cr Bezett said he had ''absolute integrity'' and had been a wonderful servant for the city.

''Thank you for the opportunity to serve the city, I appreciate it and I'll never forget it.''

Some councillors recalled Cr Butcher's arriving on the scene nine years ago as at first making them ''a bit nervous'', and said her ideas were, at times, ''a bit out of left field'', but all said she was a staunch advocate for environmental issues, women on council and mana whenua.

''I appreciate how much effort and courage was required to articulate some of the things you did,'' Jinty MacTavish said.

Cr Butcher said she was proud of her work on sustainability and heritage issues and recalled the fun she had, including the time she got then-mayor Peter Chin to sit down and knit peggy squares with her for her ''warm up a tree'' project.

Cr Collins, who served 22 years on the council, was always in touch with the concerns of the community, Cr Brown said.

Other councillors said he had been a great adviser, was fun, and would be missed.

''It's like being at your own wake,'' Cr Collins said, before he launched into a round of tales from his time on council, including the time he set off a stink-bomb in the council chamber and the building was evacuated and the fire brigade called.

He said it was satisfying to have been part of the Olympic plaque and Shanghai sister city delegations, to have CCTV cameras installed in the Octagon and the 75-plus parking permit system in place.

Many councillors praised Cr Weatherall, who is retiring after 30 years in local body politics, 15 of them as a city councillor and chairman of the council's hearings committee.

Councillors spoke of his professionalism, his dedication to due process, his steadiness, integrity and collegiality, and staff's high regard for him.

''He has been a rock for this council,'' Cr Brown said. Kate Wilson described him as ''an action man''.

He got things done and his work in the community had been fantastic, she said.

''He's a battler, he'll do anything and battle anything if he thinks it's important.''

Cr Bezett said Cr Weatherall had devoted nearly all his life to his community, be it Brighton, Otago Rugby, community boards or council.

''You talk to Colin and he would say it was a pleasure, but to us, it would be a lifetime of really, really hard work.''

Cr Weatherall appeared emotional as he listened to the tributes, and said he appreciated the opportunity to serve his community, and would do it all again, given another go.

He still wanted to see Saddle Hill protected and asked councillors to continue that battle.

He made no apologies for supporting his community.

''That is one of the privileges of life.''