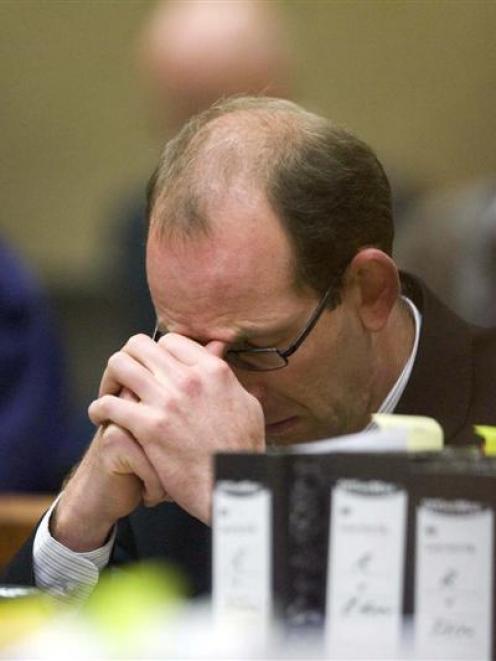 Murder accused David Bain sits with his head down yesterday in the High Court at Christchurch.
Laniet Bain told a fellow prostitute she had been sexually abused by her father in Papua New Guinea and that the baby she had there was his.

The woman, who now lives in Christchurch, said Laniet told her the baby was white and she had seen a photograph of a white baby in Laniet's room.

Previous witnesses have told the David Bain retrial Laniet claimed she had a black-skinned baby after being raped in PNG.

The former prostitute was one of two witnesses, both granted name suppression, who gave yesterday evidence about being told by Laniet she was being sexually abused by father Robin.

The second witness owned a dairy across the road from where Laniet was flatting in Russell St early in 1994.

He recalled she was usually fairly relaxed, chatty and personable.

One day, she came into the shop crying and upset and, when asked what was wrong, told him she was "having an affair" with her father.

He was "completely gobsmacked" and did not know how to respond.

The former prostitute told the court Laniet worked for her for a few months in 1993.

They often worked together on "doubles".

During one of those she saw stretch marks on Laniet's body, so she believed what Laniet told her about having a baby.

They had a few clients at Taieri Mouth and, when they passed the Taieri Beach School where Robin was principal, Laniet burst into tears.

Laniet was "petrified" of her father, said she had been sexually abused by him in PNG and that it was continuing.

"I told her to go to the police, but she said they wouldn't believe her because she was a hooker."

Laniet told her she went into the sex industry as a result of her father's sexual abuse.

Cross-examined by Crown counsel Kieran Raftery, the woman said she hired Laniet because she "seemed more open" than others who replied to her advertisement.

Laniet had "clicked on to it" fairly quickly - "she knew what to do", the woman said.

She agreed she said in an affidavit sworn in 1998 that when she asked Laniet who the baby's father was, Laniet would not talk about it.

But Laniet had told her about being raped by her father in PNG.

They were talking about why the witness was a prostitute and when she said it was a result of being raped when she was 15 that seemed to upset Laniet, who said she, too, had been raped.

She said "it was her father".

She also said the white baby was a result.

Asked by Mr Raftery which version of what Laniet said about the baby and the identity of its father was correct, "the 1998 one or the 2009 version" the woman replied, "I know what she told me."

The former dairy owner told the court Laniet shared her Russell St flat with a male they thought was a flatmate, but who later boasted he was "pimping" for Laniet.

The witness said he had not mentioned the incest until after Bain's first trial for the murders and it was in response to a request from Joe Karam for information.

He also went on television because TV3 told him it was doing a documentary and intended using his image whether he spoke to them or not.

To Mr Raftery, he said he did not recall being interviewed by a newspaper or saying anything about a baby, other than Laniet telling him she had been pregnant and had had an abortion.

"That was in terms of the relationship with her father," the witness said.

He thought Laniet told him about the incest a month or so before the shootings but, if he said something different in a 1996 affidavit, that was more likely to be correct.

He said he did not know Laniet was living at the Taieri Beach School house in 1994.

He believed she was living at the Russell St store.