By Wyatt Ryder
0 Comments
Ashleigh Thompson seems highly likely to know exactly which way her bread is buttered after completing a task for which she needed to get a bit of a roll on.

Actually, more than a bit.

The fundraising roll model was inspired to help the hospice after her mother died in its care last year. 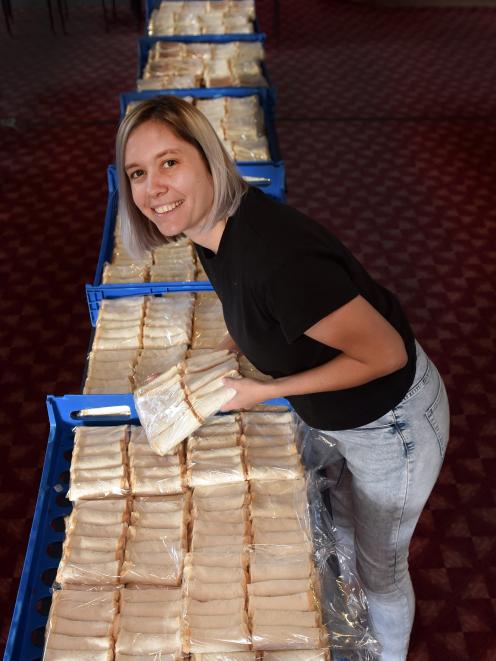 Sorting out thousands of cheese rolls by the dozen is Ashleigh Thompson, at the Kaikorai Rugby Club in Dunedin yesterday. PHOTO: PETER MCINTOSH
She said the care her family received at hospice was unbelievable.

This included a $5000 donation from OceanaGold, which got involved after Ms Thompson contacted the company about the fundraiser.

The ingredients for the cheese rolls were donated by a variety of local businesses.

That goal changed to 300 dozen, then 500 dozen. Eventually she could no longer accept orders.

After 844 dozen cheese rolls were sold, she put a hold on orders to ensure she would be able to deliver the product on time.

"I’ve never done it before, so I wanted to make sure I was keeping things as realistic as possible."

She said the members of her production line were all skilled in making cheese rolls.

Many were parents with a lot of experience.

One of the volunteers, Anna Hailes said she came out to support Ms Thompson in her mission.

She said making cheese rolls was not too bad, but they had "alternate rolling and spreading" regularly to avoid lower back pain.

"It’s all in the teamwork and technique."

Cheese roll production paused briefly so volunteers could enjoy some pizza for lunch.

Ms Thompson is among many groups making cheese rolls for charity as Otago comes into winter.

She said she would like to make the fundraiser a recurring event if possible.