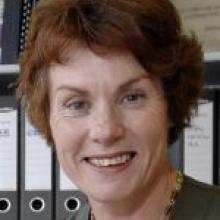 Debra Simes
Just five months from the Rugby World Cup, Dunedin faces a formidable planning challenge, not least working out how to host an estimated more than 15,000 supporters before and after matches.

With the largest traffic management plan in Dunedin's history to be organised, 120,000 guidebooks to be produced and delivered, and 400 volunteers to be trained, the pressure is on to be ready for the September event.

But deputy mayor Chris Staynes said despite the "moving target" of extra games added recently, the city would be ready.

"I think for where we are at this stage, I'm reasonably confident we can get it all done."

A report to the Dunedin City Council finance, strategy and development committee on Monday lays out the tasks the city faces to be prepared.

It covers aspects from venues, accommodation and hospitality to waste management, promotion and walking routes.

Council marketing and communications agency manager Debra Simes said in the report the reallocation of matches following the Christchurch earthquake, which brought England and Argentina to the city for extended stays, meant a greater demand on accommodation and hospitality.

"There is still work to be done to clarify how Dunedin will host over 15,000 visiting supporters in food and beverage outlets pre- and post-match."

Ms Simes said this week the changes meant the city would be hosting the England team and its supporters for 16 nights.

England attracted the second-highest number of supporters behind Australia.

The sheer volume of visitors meant food and beverage businesses in Dunedin's suburban hubs, including St Clair, Andersons Bay, Roslyn and Northeast Valley, would have to be used, and the key to that was co-ordinated transport.

"They [visitors] need to know where to go and how to get there," Ms Simes said.

To that end, council staff had been liaising with taxi and bus companies to make sure services would be available.

While there was a lot to organise, spreading visitors across the suburbs meant the whole city had an opportunity to benefit, rather than just the central city.

Consultation on the draft transport plan, amended with the match reallocations, would begin this month, and would include the tertiary institutions that fell within the managed area.

The plan would encourage fans to walk to the stadium from the Octagon, George St and the railway station.

Shuttles would not run from the Octagon to the stadium, as the 1.7km distance was considered "an acceptable walking distance", though there would be provision for vehicles carrying anyone with disability issues.

The Taieri Gorge Railway had confirmed trains would run from Mosgiel and Waitati or Waikouaiti, and return, for games, at a cost of $5.

Ms Simes said 400 volunteers would be required as visitor hosts, providing information and directions and a variety of other services.

The council, the Otago Rugby Football Union and Sport Otago had been recruiting volunteers and by the middle of last month sufficient people had been interviewed and confirmed to meet that target.

Recruitment had been "a time-consuming and arduous job", as 396 people had been interviewed for the positions, some were expected to drop out by the time of the event, and more would probably be needed.

For the world cup, a regional guide publicising festivals and events would be produced. About 120,000 copies would be required, sufficient to deliver one to every Otago and Southland home and business.

Department of Internal Affairs and REALNZ funding was confirmed for the guide.

Cr Staynes said more staff members had been added to the council team preparing for the world cup.

Nights in Dunedin
- September 1 to October 3