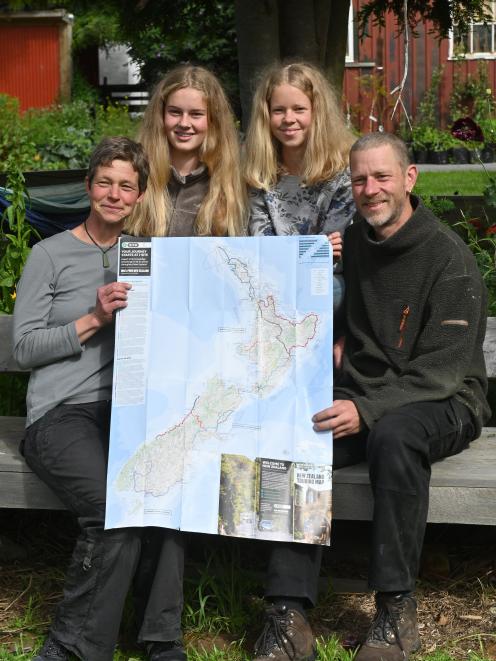 Back on dry land after eight months' sailing around New Zealand, the Haase family (from left) Katrin, Mara, Frauke and Jorg have quickly settled back into their old routines. Photo: Linda Robertson
They had sold their home, left their jobs and would not step inside a school for more than half the year.

Now back home and settling into life in Dunedin again, the family of four - Katrin, Mara (14), Frauke (13) and Jorg - say their trip was an unforgettable life experience.

Their journey took them along the east coast of the South Island, around the entire North Island then back to Dunedin, mooring in different bays and harbours along the way.

Before they left Dunedin on January 19, Mr Haase had little experience sailing a yacht on the open ocean.

He soon came to grips with the H28 yacht.

"It works out to be only half as scary as you would think."

While there were parts of the journey where they could not avoid bad weather, they did their best to stay away from anything too serious, he said.

"We had a few long stretches we had to negotiate, but mostly we were good at avoiding bad weather.

"We just tried to stay to the coast during long stretches and hide away from bad weather on the shorter ones," he said.

Overall, there were only about five days of bad weather they had to sail through during the entire trip.

For the two girls, the trip was a lesson they would not have got in a classroom, although they still made sure they did their homework on time, their parents said.

"Whenever we were in a marina or harbour they were busy doing correspondence school for days and we had to wait until they were finished," Mrs Haase said.

Despite living in such close proximity to each other for months on end, they all wanted to do another long journey but not before the girls finished school.

After arriving back on dry land in August it did not take long for them to settle into their old routines.

"Every now and then you have to grab those photos and look at them to remember, oh yes we actually did do that," Mrs Haase said.