Sands shifting for the good of the city 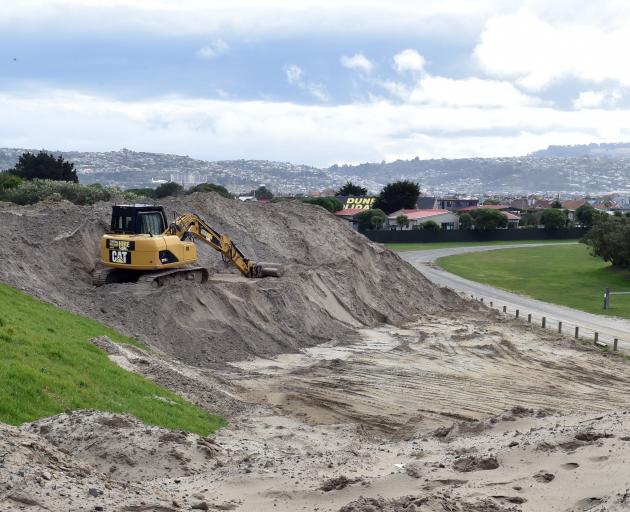 Sand removed from a development site at Tomahawk (right) is being stored next to the Tahuna Park sports fields for use in replenishing Dunedin’s beaches. PHOTO: GREGOR RICHARDSON
More than a thousand truckloads of sand are being stockpiled to restore dunes and replenish beaches on Dunedin’s southern coast.

The sand from a residential development site at Tomahawk has been secured by the Dunedin City Council and is being stockpiled next to the Tahuna Park sports fields.

A second storage site is planned at the western end of Kettle Park.

Council infrastructure and development general manager Simon Drew said rubble would be removed from the Middle Beach dunes and the extra sand would be used both for protection of the dunes against erosion and to restore beaches after sand-stripping storms.

Ocean Heights subdivision developer Allan Dippie offered the sand to the council at no charge, and to pay for cartage to the storage sites. Mr Drew said the deal could save ratepayers more than $1million.

‘‘It’s really good sand and it will end up where it came from.’’

The sand had been blown on to the Centre Rd site over a long time.

‘‘It’s very fitting it’s being recycled back to the beaches it has been wind-blown from over many thousands of years.’’

The offer of the sand came at an opportune time for the council, which is formulating a plan for management of the St Clair to St Kilda coast.

Challenges include the St Clair sea wall being prone to damage from storms, erosion near the wall and the risk of an old landfill under Kettle and Marlow parks becoming exposed.

The Moana Rua Rd area was a vulnerable part of the beach, the consultant said.

The council will cover the cost of storing the sand.

Up to 500 truckloads can be accommodated at Tahuna Park and about 600 at Kettle Park.

A variation to a resource consent is required at Kettle Park and has been applied for.

Mr Drew expected the sand to be used incrementally.

Mr Dippie said the subdivision was at the earthworks stage and the plan was for about 50 sections looking down on the beach.