If all you want for Christmas is to sit on Santa’s lap, you will be having a jolly time this year.

Despite Covid-19 restrictions meaning people will not be able to sit on Santa’s knee in some New Zealand cities, you will be allowed to in Dunedin.

It was good news for Chloe Thompson (7 months), who got to meet Santa for the first time, in the Meridian Mall, yesterday.

She was more than ready for the occasion, dressed in a festive hat with reindeer ears and festive clothing including a top that said, "my first Christmas".

She was joined by her brother, Lucas (4), who knew Santa well and was on his fourth visit, but that did not mean he was any less excited. 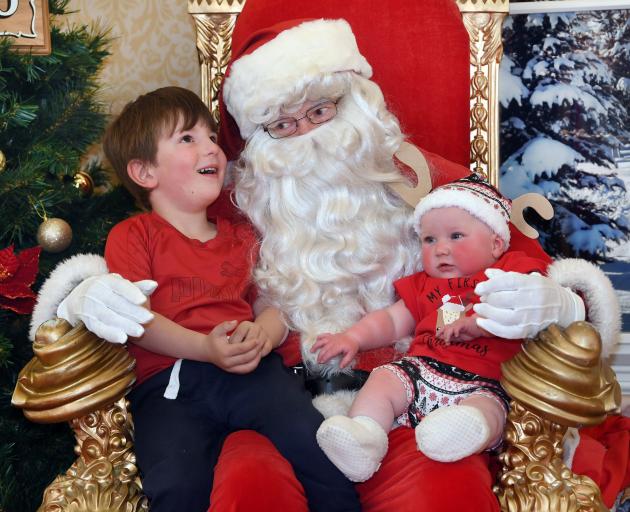 He was eager to tell Santa he hoped for a fire engine, Lego and a model of a car for Christmas.

Also meeting Santa for the first time were Sasha (8) and Jake (5) Kavanagh, of Queenstown.

Jake was so star-struck that he forgot to tell Santa what he wanted for Christmas, and had to go back and see him again, mother, Angela Kavanagh, said.

His silence had given Sasha plenty of time to tell Santa about the clothes she wanted.

Mall marketing manager Stacey Menzies said this year, more than ever, it was important to keep the experience as magical as possible for children and families.

Ministry of Health’s guidelines said people could sit on Santa’s lap in Dunedin, but had to stay safe.

Santa’s Grotto visitors would be required to use the contact tracing QR code.

A Ministry of Health spokeswoman said those visiting Santa should remember that he was in the vulnerable age group for Covid-19.

People should use sanitiser and the tracer app. Anyone feeling unwell should not visit Santa and instead send him a letter outlining their Christmas wishes.

"If we can take these precautions, we can all have a jolly Christmas after what has been a particularly difficult 2020."

Santa and his helpers will be at the Meridian Mall until Christmas Eve.

Good on the Meridian Mall people for allowing this to happen this year. It will bring a lot of happiness to a lot of kids, and I'm sure a few older ones too.