Animals have long been part of the Santa Claus story, but for Dunedin resident David Dijker his close encounters are often with dogs, cats or the occasional white rat.

And in his recent "pet Santa" or "Santa Paws" role, he’s definitely not tangling with reindeer during dizzying sleigh rides high above the snow-spattered roofs of Christmas towns. 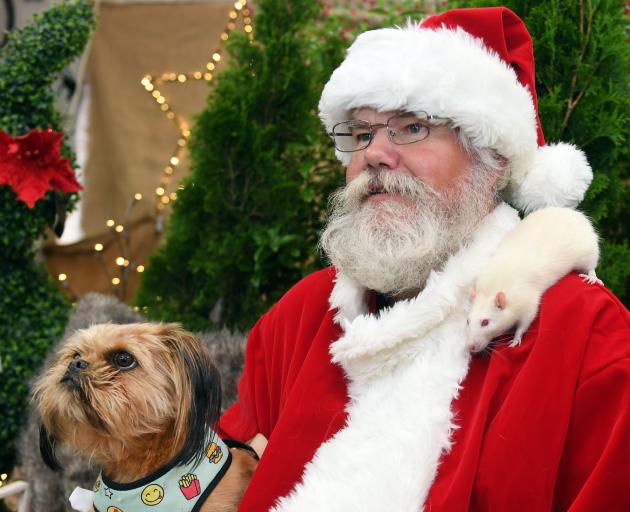 "It’s a dream job," Mr Dijker, who is usually a senior shop assistant, says of his role in "Santa Paws" events, including at Nichol’s Dunedin Pet Centre yesterday.

This is the fourth consecutive year that Nichol’s has offered a "Santa Paws" experience, which continues in Dunedin from 9am to noon today.

Pet owners bring in their pets on a lead or in a cage and the firm photographs the pets with their owners, and Santa, and makes free images available, in exchange for a gold coin donation to the SPCA.

Yesterday, Mr Dijker encountered cats, rabbits and the rat, as well as many dogs.

Over the years he has also had visits from a pig, a horse, a tortoise and a few guinea pigs.

"Today was really good," Nichol’s Group marketing and communications manager Annabel Roy said of the about 450 people and 250 pets who came yesterday afternoon.

"We’re bracing ourselves for a really busy day tomorrow," she said.

And the pets people brought in for photographs with their families also had some unexpected benefits.

Some young children who initially felt "intimidated" by the large and unfamiliar figure of Santa Claus found it easier to sit beside a more familiar family pet dog, and were more relaxed because of the rapport between the dog and Santa, she said.