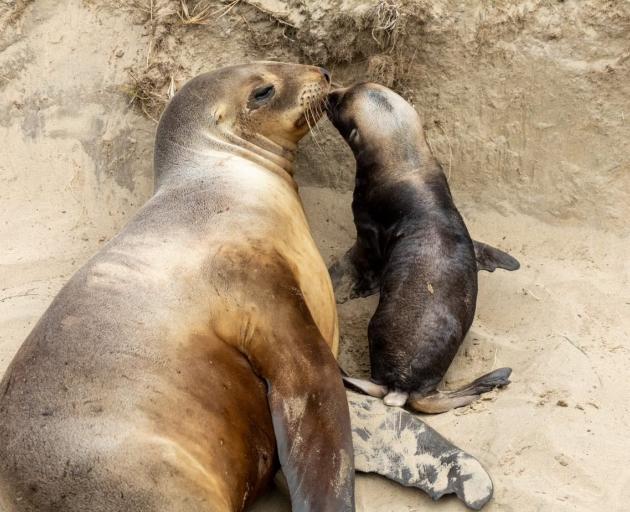 Sea lion Mika with her 6-month-old pup who was found dead after being run over by a vehicle on Sunday. PHOTO: SUPPLIED
Another of Dunedin’s sea lion pups has been killed by a vehicle, this time in a hit-and-run on the Otago Peninsula.

Department of Conservation biodiversity ranger Jim Fyfe, of Dunedin, said the death happened on Sunday afternoon and was reported by a member of the public on Monday.

The 6-month old pup was hit by a car in Papanui Inlet Rd, near the intersection with Sheppard Rd.

Whoever hit the pup would have known about it, Mr Fyfe said.

The pup weighed up to 50kg and the body had tyre marks over it.

"They would have felt it all right," he said.

He was disappointed the driver did not inform Doc.

People had accidents, but there was an obligation and an assumption that the deaths of threatened species would be reported, he said.

The pup was a descendant of Mum, the sea lion matriarch depicted in a statue at The Esplanade at St Clair.

Mum’s great-great-granddaughter, Mika, gave birth to the pup at Sandfly Bay at the start of the year.

Plans were being made for the pup’s burial, Mr Fyfe said.

It was close to being given a name, Ms Whyte said.

As the sea lion population expanded, people needed to be aware that sea lions could be around, especially when using roads that ran beside inlets and beaches, she said.

She said it was important to report accidents involving sea lions so steps could be taken to better protect them.

"If it’s an accident, you’re not going to get in trouble," she said.