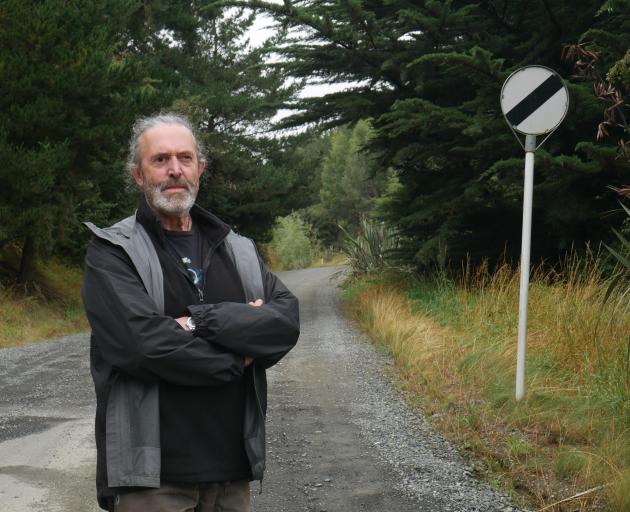 Shortcut Rd resident Chris Linsell has started a petition to stop the road being used as a through road, in an effort to improve user safety. PHOTO: JESSICA WILSON
Using Shortcut Rd may save motorists some time, but residents want it split into two due to ‘‘grave concerns’’ about pedestrian safety.

Resident Chris Linsell started a petition to stop the road being used as a through road by installing a barrier just south of the junction with Dons Creek Rd.

It has been signed by more than 20 residents from both roads, many of whom have children at the nearby Waitati School in Mt Cargill Rd.

In a letter to the Waikouaiti Coast Community Board, Dr Linsell said the road was so dangerous that parents did not let children walk to school.

‘‘Everybody is concerned about safety.’’

The road had many blind corners and there was nowhere safe for pedestrians or cyclists, he said.

There is a restricted road sign at the north end of Shortcut Rd.

According to the Driving Tests website, the sign indicates the national speed limit applies - it is a ‘‘speed limit derestriction and the maximum limit of 100kmh must be obeyed’’.

Dr Linsell said some motorists used the road as a ‘‘hill-climb’’ and took the sign as an ‘‘invitation to speed recklessly’’.

The alternate route, Mt Cargill Rd, was only 1km - about 45 seconds - longer, he said.

Waitati School principal Stacey Honeywill said the school had been concerned for some time about pupil safety as they travelled to and from school.

The school had taken steps to improve safety, such as building an all-weather path for children walking and cycling to school and advocating for improvements to be made to Mt Cargill Rd near the school entrance.

More traffic-calming and speed control measures would be introduced soon, she said.

‘‘As residential development continues in our area and the popularity of Waitati as a visitor destination also grows, we will see ongoing increases in traffic around the school and this includes Shortcut Rd.

‘‘The school would support a committed review of safety for residents, pupils, staff and whanau.’’

Dunedin City Council transport engineering and road safety team leader Hjarne Poulsen said the council was working with the community board and would look at the possibility of closing the road, possibly as a trial to start with.

‘‘Our first step is to gather existing data, such as vehicle numbers and speeds, and then consult with key stakeholders such as Waitati School.’’

After collecting data, the council would assess whether closing the road was feasible and what the likely effects would be.

‘‘The council can then make a decision based on our assessment.’’

Waikouaiti Coast Community Board chairman Alasdair Morrison said safety around Waitati School was a priority, as closing the road would divert more traffic past the school in Mt Cargill Rd.

Doing a traffic count would help get an idea of many cars were using the road and what the consequences of closing it might be, he said.

In the meantime, maintenance work such as removing vegetation could be done to give drivers a clearer sight line, he said.

Putting a footpath or gravel track along it would be the best solution. Mt Cargill rd is just as dangerous so closing Shortcut just moves the speed issue somewhere else. I guess that's the signed residents goal... with their not in our backyard mentality..