By Shawn McAvinue
0 Comments
Dunedin man Simon Bishop is proving wrong all the parents who have told a child that playing video games will get them nowhere.

The electronics salesman is set to embark on an all-expenses paid trip to represent New Zealand racing digital cars in Monaco in Western Europe between November 21 and 24.

The organisers of the multiplayer simulated racing competition — the Gran Turismo World Championships — were paying for his trip including flights and five-star accommodation. 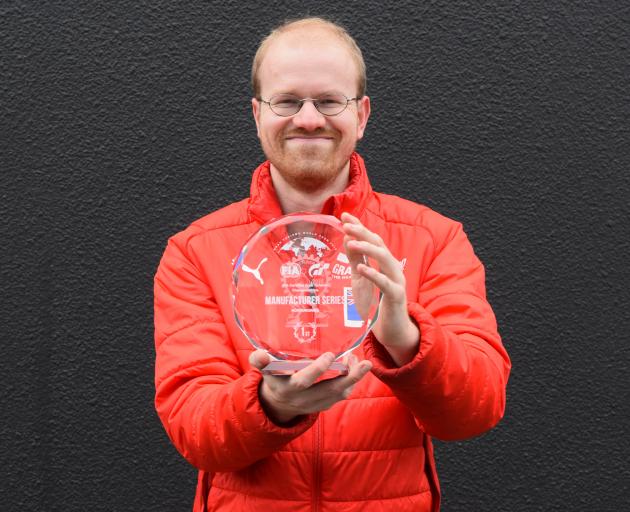 Dunedin electronic sports champion Simon Bishop (29) with a trophy he won racing digital cars in Germany as he prepares to travel to Monaco to represent New Zealand in eSports next month. PHOTO: SHAWN MCAVINUE

To qualify for the event, he competed in 40 rounds of a car racing game online on Wednesdays and Saturdays nights, racing a field of other hopefuls across New Zealand and Australia.

During the qualifying rounds, each of the three million racers across the world, competed to improve their ranking.

If a low-ranked driver won a race and the field contained a high-ranked player, then the winner’s standing climbed at a higher rate, he said.

After many qualifying races, ‘‘super star races’’ were scheduled so the 16 highest­ranked competitors in Oceania could compete.

The most points were up for grabs in those races.

It has never been this close before in the #FIAGTC Manufacturer Series, the racing only gets better!

The win gave him enough points to go clear of Matthew Brown, of Invercargill — who was vying for the one spot available for a New Zealander to compete against 35 sim-racers set to fight for the Nations Cup in Monaco. He had raced Mr Brown many times online before meeting him in person for the first time at an eSports tournament in Tokyo about a year ago.

Since competing in Tokyo, he had been flown to eSports tournaments in Austria, Germany, Taiwan and the United States.

During acompetition in New York, he was chauffeured around in a limousine and stayed in Times Square.

In Germany, he was part of a team who won an event at the Nurburgring motorsports complex in June — competitors racing on a virtual copy of the challenging track.

The tournament organisers paid for everything because the competitions were ‘‘expanding the scene’’ of eSport.

‘‘The scene is exploding — I don’t know if it will burst but at the moment its trajectory is astronomical.’’

He was ‘‘passionate’’ about motorsport and as a boy dreamed of racing cars competitively. The dream was shattered by the sport’s expense so sim-racing was a way to get doors to open for him.

‘‘I am living the life of a racing driver.’’