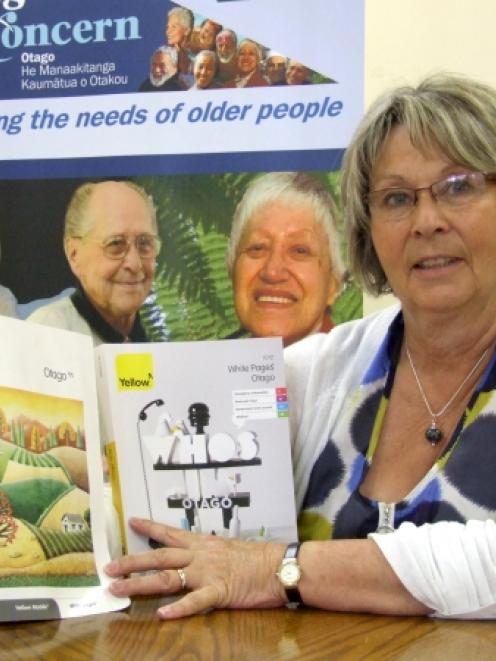 Age Concern Otago chief executive Susan Davidson compares the size of the old and new phone books. She says she has heard from about a dozen older people who say they have trouble reading the print in the new phone books. Photo by Vaughan Elder.
Age Concern Otago and Grey Power are concerned many older people will not be able to read the print in the recently released Otago 2011/12 phone book.

Age Concern Otago chief executive Susan Davidson said within a few days of the phone book being delivered, she heard from about a dozen older people who had trouble reading the print.

Some of those who complained felt they were treated with "disdain" by Yellow, the company which produces the phone book, when they called the company with their concerns, Ms Davidson said.

"When they have rung the 0800 number to make their comments they have not been treated very well by the people receiving their complaint at the other end," she said.

She said shrinking the phone book would affect people in older generations more than others because they were more likely to rely on it than younger people, who often used the internet to search for contact details.

Grey Power Dunedin president Jo Millar said she had "no doubt" many older people would have trouble reading the phone book.

Instead of providing a magnifying strip to people who could not read the new book it should be offering a replacement book with larger print, Ms Miller said.

"I know if they jam it all up into a smaller book it's going to cost less, but they are supposedly providing a service," she said.

Yellow communications manager Charlene White said the books were made smaller "so they are easier to use, handle and store".

The smaller format was in place across the whole country and used 5% less paper, which reduced the impact on the environment, she said.

The company had run focus groups before making the changes.

"They told us that whilst they would have liked the font size to remain at its original size, they were happy to trade off the slightly smaller font for a book that was easier to use and store."

The company was disappointed to hear some community groups were not happy but had only received "a very small" number of complaints about the size of the book, she said.

Yellow was "sorry to hear" some people felt they had not been treated well when calling the company and would "certainly look into that".