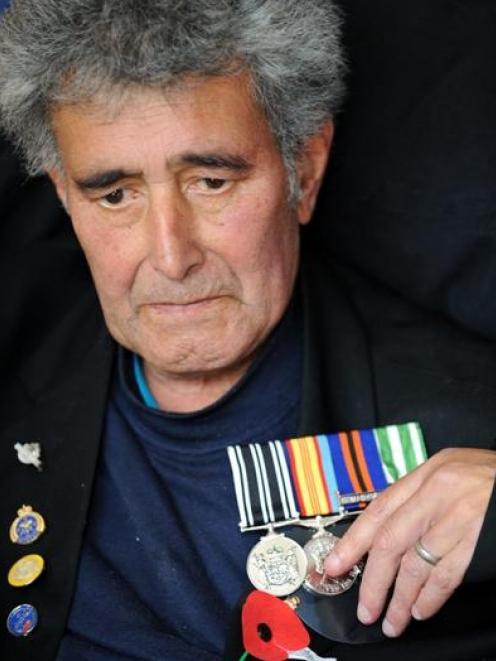 Winata [Jimmy] Opai planned to lay a wreath at this morning's dawn parade. Photo by Stephen Jaquiery
Vietnam veteran Winata (Jimmy) Opai began today with one last mission in mind: to lay a wreath at the cenotaph in memory of comrades who did not make it back from Vietnam.

Mr Opai (63) was diagnosed in February with cancer of the pancreas and is resident at the Otago Community Hospice. He qualified for the Government Agent Orange compensation package announced in 2006.

His wife, Alva, yesterday said Mr Opai, of Ngati Porou descent, was born in Auckland and joined the army at 17. A year later, he went to Vietnam with the howitzers of the Royal New Zealand Army's 161 Battery.

There, both his eardrums were ruptured, he was taken to hospital with a scorpion sting, and was showered with Agent Orange.

After 21 years in the army, he spent 12 years as stores manager at the Otago Hospital Board.

Mr Opai was married for the second time last year, and besides looking forward to the dawn parade, he also hoped to see the birth of his grandchild tomorrow.

Mrs Opai said: "We were hoping to go to this big [Vietnam veteran] welcome-home parade in Wellington, but Jimmy's not going to make it.'' The parade is at Queen's Birthday Weekend.

Mr Opai has always attended dawn services and today planned, with assistance, to climb the two steps to the foot of the cenotaph to lay a wreath.

Two of Mr Opai's brothers, his sister and a brother-in-law all served in Vietnam.

Mrs Opai said her husband's medals were stolen some years ago, but this week, the Defence Department gave him replacements.