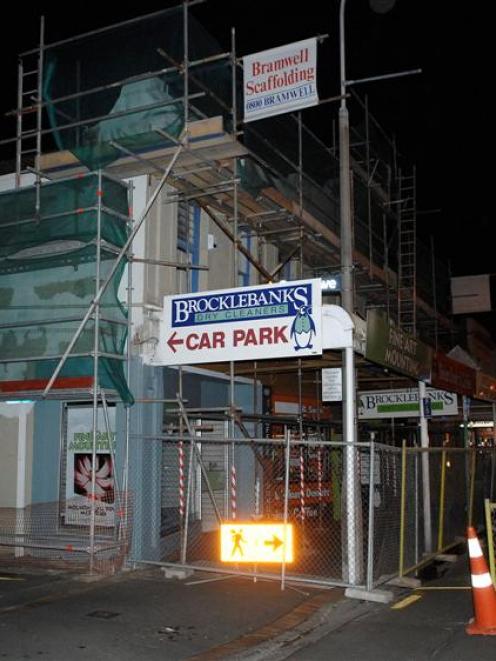 The closed and scaffolded building in South Dunedin last night. Photo by Linda Robertson.
A south Dunedin building was closed by the Dunedin City Council yesterday and is likely to be condemned after its facade was discovered to be cracking and leaning.

"My brother Steve had a meeting with the council at 3 in the afternoon and they came around and pulled the pin about 4.30. There wasn't much warning," he said.

"It was discovered when scaffolding was put up on the building for the painting of South Dunedin [shop facades]. There are gaps appearing in the old facade and there's a bit of a lean. We don't know if it's from the earthquake, but the building is over 100 years old," Mr Brocklebank said. "It's a nuisance for everybody, because we've got good tenants in there."

Mr Brocklebank said he would be able to continue operating his dry cleaning business out of the back of the building.

"It's only the facade at the front that can't be used. But, it looks like the building might have to be demolished."

Dinkum Donuts owner, Shane Ayers, who has operated his business at the site for nearly four years, said there was no warning of the closure.

"I was just closing up shop about 5pm and structural engineers from the council came around and started barricading it off. It was real shock," he said.

Mr McLeod could not be contacted for comment last night.